Rams DT Michael Brockers has a Thanksgiving message for you

The Rams had their young defensive linemen in the holiday spirit.

Share All sharing options for: Rams DT Michael Brockers has a Thanksgiving message for you

Thanksgiving is less than 48 hours away. Michael Brockers has a message for you: Happy Thanksgiving.

Upon further review, seeing a 300-pound defensive tackle dressed like on intimidating turkey isn't quite the Thanksgiving greeting I imagined it to be.

Brockers was dressed up, along with the rest of his fellow linemen to deliver Thanksgiving turkeys to families in the area, a very cool move by the Rams. Still not sure about this guy showing up at your door if you didn't know he was coming ... 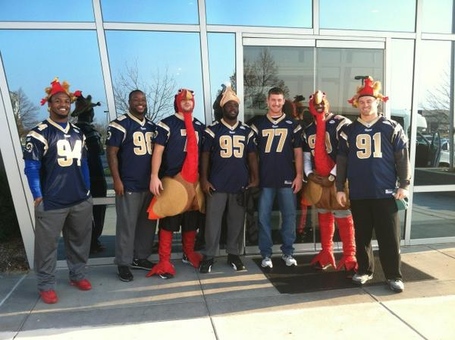 These images come via the Rams' official Twitter feed, which you should obviously be following if you aren't already.

So let me throw this out there for you. What other Rams player holiday tie-ins would you like to see? Clearly one player needs to be eyeing a Santa Claus outfit to put on in a few weeks. Danny Amendola makes a great elf.