Sixty-Nine Seconds Away From Victory

Sixty-nine seconds. The Rams were sixty-nine seconds away from a victory on Sunday, and one that would’ve continued their win streak against their NFC West opponents in 2012. After an extremely exciting, methodical, time-consuming final drive for the Rams in regulation, the 49ers were left with just over one minute to even the score.

Share All sharing options for: Sixty-Nine Seconds Away From Victory

I can vaguely remember hovering my finger above the ‘Dial’ button after punching in '911' on my iPhone immediately following the Rams last offensive drive of the game. Fueled on a Rock Star and adrenaline, my heart was about to thump out of my chest as Steven Jackson had just blown up Patrick Willis on the play action fake, allowing Sam Bradford to find Austin Pettis open five yards deep into the end zone for the score. This paragraph - this article - wouldn’t be complete without praise to #39 for keeping Bradford conscious on Sunday. As Willis’ fingers were a mere inch away from Sam, Jackson laid the block heard round the world. "I trust my life with Steven Jackson as a pass protector" - Sam Bradford. You should… 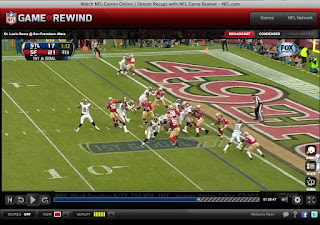 Now leading the game 24-21 - and having done so in a spectacular 14 play, 80-yard drive that chewed up 7min 14 secs of precious clock - the Rams kicked off to Ted Ginn Jr., who returned it to the 49er 22 yard-line with 1:03 left on the game clock. As Rams fans across the nation begged for their defense to hold a 49ers offense, now lead by inexperienced second year Quarterback Colin Kaepernick, took the field. With sixty three seconds remaining, my mind rifled through a litany of uncertainties. Does Kaepernick have the ability to move the ball on a formidable Rams defense that had momentum on its side with just over one minute to play? Where do the 49ers need to get the ball in order for David Akers to have a chance to tie this game? Will the Rams get the interception that I’ve been waiting for since Week 4?

I’m betting that there are probably still fans either scratching their heads [possibly while assessing the damage they’ve inflicted in their homes] about how the 49ers were able to move the ball on their final drive, but I can assure you it was due to the athleticism of their second year quarterback. On first down he showed the 4.53 second 40-yard dash time that was displayed at the combine in 2011. Having lined up in a three-receiver set, the 49ers sent Vernon Davis, Randy Moss, and Mario Manningham on deep routes, while Michael Crabtree stayed close to home on a three yard stop route.

Coverage in the secondary, specifically on the deep routes, was solid. Kaepernick had nowhere to throw, except for potentially Frank Gore who had also run a three yard stop route directly in front of him. As Chris Long and Robert Quinn tried to beat their men on the outside, Kendall Langford faced a double team. Michael Brockers, still at the line of scrimmage, was left as the sole Rams defender between Kaepernick and the line of gain. Frank Gore and Crabtree immediately became blockers, as he tucked the ball and blazed down field for the 19 yard gain on first down. 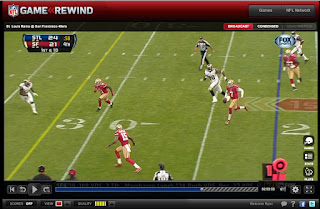 While cornerback Trumaine Johnson laid on the ground injured, the commentators were given ample time to discuss the gutsy call of Jeff Fisher to sit starting CB Janoris Jenkins and WR Chris Givens. Furthermore, they were awarded the time to discuss - and display - video of Jeff Akers in pre-game warmup, where he made 60-yard field goals look like chip shots. Akers, who was already good from 63 this season, was a mere nine yards [prior to the 2nd down snap] from being forced to attempt his own NFL record-tying kick. That wouldn’t be necessary, and once again due to the decision-making and speed of Kaepernick.

On 2nd down, the Rams sent five rushing. Robert Quinn - again - was unsuccessful as he tried to penetrate on the outside of the offensive tackle, and was forced to the ground two yards behind the quarterback. Brockers, who had lined up on the inside of Quinn, made a spin move inside. In doing so, a hole the size of the Golden Gate bridge opened up to Kaepernick’s left. He stepped into the hole, got Brockers to momentarily bite on the pump fake, tucked and ran while his trusty RB Frank Gore again became his blocker. 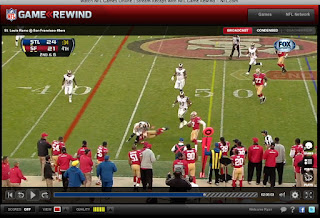 Having killed the clock with thirty-three seconds left, and leading his team to the Rams 46-yard line, Kaepernick had successfully gotten the 49ers into viable, though distant, field position to attempt a game-tying field goal. His work would not yet be done, though.

Immediately following that run play, Kaepernick merely avoided getting sandwiched simultaneously by Chris Long and Robert Quinn. He was able to step up, extend the play with his legs, and threw a perfectly placed thirteen-yard pass to Kyle Williams, who was loosely covered by Cortland Finnegan along the sideline.

The 2nd down pass to Kendall Hunter was another impressive play Kaepernick, who was unable to avoid being hit hard by Chris Long, but was able to adjust his body and make a jumping throw over Kendall Langford. The 15-yard line would be the eventual spot of the game-tying Akers field goal. 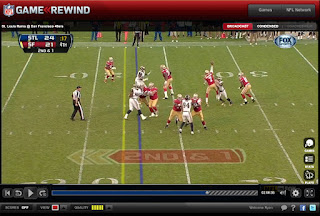 If it’s not evident, I’m giving Colin Kaepernick a lot of credit for preventing the 49ers from losing a game, which I feel would’ve been had quarterback Alex Smith remained in the game. The agility and speed that he possesses enabled him to avoid sacks, extend plays, and provide first downs while still stopping the clock along the way. The 19 yard trot to start the drive isn’t a play that I believe would’ve been made by Smith, who averages 4.6 yards on his 29 rushing attempts this season. He displayed his [in]ability to slide earlier in the game, and was concussed. Had he not run, or "slid," the outcome of the game would’ve been different.

The Rams, defense, however shouldn’t have a finger pointed in it’s direction for not holding the lead and winning the game. Go back and watch the last sixty-nine seconds. There was adequate pressure from the front four, and Kaepernick wasn’t running on designed plays. He made split-second decisions, after avoiding pressure, to gain those yards with his legs. Only once on that final drive - being the pass to Williams - was Kaepernick afforded the opportunity to throw the ball to a [semi] open receiver. Kaepernick was showing mobility that you see in the likes of Cam Newton and Robert Griffin III. He didn’t win the game for the 49ers, but he should certainly be given credit for not losing it. Credit the Rams defense for holding them to a field goal, being winded and with their backs uncomfortably close to their end zone.