St. Louis Rams use big plays to beat the Arizona Cardinals: An animated look back

Share All sharing options for: St. Louis Rams use big plays to beat the Arizona Cardinals: An animated look back

You've had almost a full day to digest it. The St. Louis Rams manhandling of the Arizona Cardinals on Thursday night still feels like it belong to the ephemeral, some sacred memory. When you close your eyes you see Robert Quinn barreling into the pocket to make an example out of Kevin Kolb.

This was a game of big plays, the kind that used to just fall apart for the Rams. Not anymore. Queue up something surreal and dreamy on the hi-fi and let's take a look back at the night that was.

The Rams struck quick getting a touchdown on their first possession of the game. Sam Bradford hit Danny Amendola, who lined up on the outside, with a 44-yard shot down the left side of the field.

It wasn't all buddy, buddy for Bradford and Amendola. They had a miscommunication on a route in the middle of the field in the second quarter.

Bradford wanted Amendola to run a deeper route, but Danny stopped short about 8 yards down the field.

It wasn't too long after that when Amendola hurt himself diving for the ball. He might not be back for a 6-7 weeks while he recovers from a separated clavicle. He was kinda mad about it.

The Rams were kind of hard on Kevin Kolb ... and we loved every minute of it. When football is banned and they show this game as Exhibit A, I'll still enjoy it.

Kendall Langford and Cortland Finnegan put one of the biggest hits on Kolb in the second quarter, but it drew an unnecessary roughness flag, a specious call. It kind of hurts to look at the hit.

Robert Quinn had three sacks. Six other players were credited with sacks too, though it was clearly a group effort.

Bradford found Chris Givens for another big play in the fourth quarter, a 51-yard touchdown pass to Chris Givens, his first NFL touchdown.

Big plays, drama ... this one had it all. Go ahead, celebrate! 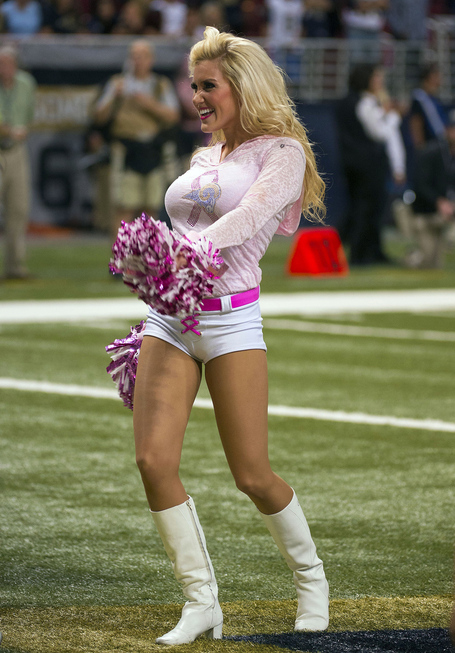 Photo via Scott Rovak - US Presswire