The St. Louis Rams used a dominant defensive performance to put themselves above .500 for the first time in six years.

The St. Louis Rams are 3-2 after a 17-3 win over the Arizona Cardinals, the previously undefeated Arizona Cardinals. This is the first time that the Rams have been above .500 at any point in the season since 2006. That was the same year we hung out our shingle here at Turf Show Times, and I can honestly say that since that time, I have never seen a Rams team like this one.

There's only one place to start, with the defense. It was the most inspired defensive performance at the Edward Jones Dome in at least as many years. The crowd ate it up, giving the home team an advantage most of the players have never experienced, not with this team at any rate.

This was the first game of the season that the Rams' outstanding secondary did not manage to pick off the opposing quarterback. They didn't need to. The defensive line terrorized Kevin Kolb, sacking him nine times ... nine times. Robert Quinn led the bunch with three sacks and a forced fumble. Chris Long came up with one sack, but generated relentless pressure. Both ends got around the woeful Arizona offensive tackles as if they weren't even there. Had the refs bothered to call the holding on them, who knows what might have happened.

Nine sacks, 13 hits, 21 hurries and 13 knockdowns ... that's the final total for the Rams defense on the night. Kevin Kolb has been sacked 17 times in the last two games.

"We wanted them to get the ball back so we could get after them again," Long said in the NFL Network post-game show 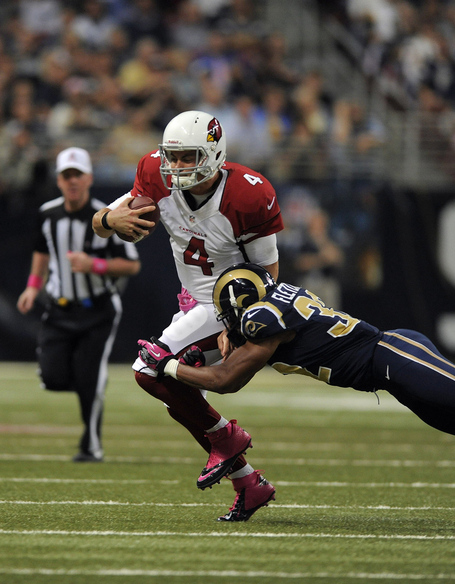 Now, let's talk about the offense. It needs some work, but to their credit, they found a way, on a 51-yard touchdown pass from Sam Bradford to Chris Givens. Finding a way is all that really matters, and they rebounded well after losing Danny Amendola in the second quarter.

Dropped passes hurt Bradford's final numbers, Amendola had a pair of drops on tough throws and Givens dropped a couple too. The quarterback finished the game 7-for-21 with two touchdowns and an interception. He found a way to make it work.

The Rams got the running game going, especially in the second half. St. Louis ran the ball a total of 32 times, just nine of those attempts came in the first half of the game. Brian Schottenheimer stuck with the run, passing the ball to set it up, and it worked ... it worked well enough, though it was never pretty.

The Rams offense found a way to make things happen, and that's the real take away here. 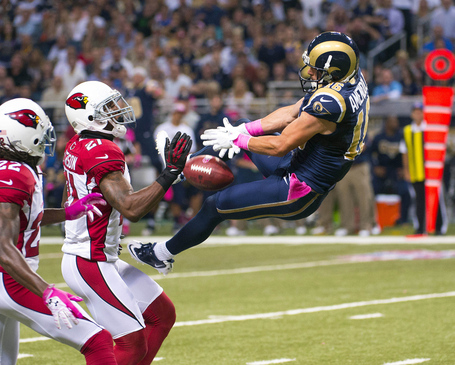 Losing Amendola hurts. He has a broken collarbone and could be out six weeks, maybe even more. The other receivers need to elevate their game, develop a connection with Sam Bradford. Brandon Gibson had a solid outing, catching three of four passes thrown his way. Getting Gibson and Brian Quick and Steve Smith and Austin Pettis in sync on those routes over the middle will be essential. Getting Lance Kendricks' hands stickier will help too.

Quintin Mikell had a nasty hit to the head, but it was encouraging to see him walk off the field. He'll have to pass the league's battery of concussion tests. Hopefully, he's back on the field soon, because the Rams are thin at safety.

Linebacker Mario Haggan could be more of a loss than you realize. He has a thigh injury.