A preview of the Rams' Thursday night game against the Arizona Cardinals.

Well, this is it. This is the one night the NFL world will watch the St. Louis Rams without any other options. No baseball playoffs, no NBA games, no NHL games and a relatively weak college football slate.

In other words, the sporting world will be watching.

The last time the Rams were center stage, it was week 17 of the 2010 season, a game I'm still trying to convince myself never happened. The stakes certainly aren't as high, though it could prove to be a crucial point in the season for both teams.

The Cardinals are riding high on a 4-0 start for the first time since 1974 in entertaining, albeit unexpected, fashion. Now with the first of their two primetime games approaching, the opportunity to extend the NFL's best record in the last 13 games carrying through the offseason will be at the fore during the pregame coverage.

As for the Rams, it's all in front of you. A home game on Thursday night with the chance to take the team on the better side of .500. The Rams haven't had a winning record since 2006. Changing that would be an unambiguous fact that Jeff Fisher has this team moving in the right direction.

For game-related info, check out the SBN page for the game. For Cardinals news leading up the game, check out Revenge of the Birds. Here's the injury report.

Tough to draw any obvious conclusions here. Sure, the Cardinals have a wealth of options at WR led by Larry Fitzgerald with Andre Roberts, Early Doucet and rookie Michael Floyd in tow. TE Todd Heap, while not the threat he was in the mid-aughts, is still a viable receiving option. The key is whether you buy Kevin Kolb. After being benched in favor of John Skelton, a injury to Skelton in the season opener opened the door for Kolb to lead the Cards for a late game-winning touchdown over the Seahawks. In the next two games, his work rate was limited to under 30 pass attempts in both; nevertheless, he avoided throwing a pick as the Cards would down the Patriots on the road and Philadelphia at home. To that point, things were remarkably impressive. Last week, down 13-0 at the half, the Cardinals aired it out. Kolb would finish with 324 yards on 48 attempts. The confusing line though was his three touchdowns to two interceptions. When Cardinals fans are suggesting "he toes the line between trying to make plays and being reckless," the Rams should be eager to take advantage.

And I'm running out of superlatives to describe this pass defense. They're just really, really good. Sometimes, there's not much more that needs to be said.

This might be the most interesting matchup tonight. Outside of the Philadelphia game, the Cardinals have struggled to get any semblance of a serious rushing threat. Some, myself included, would argue this is a function of a horrendous offensive line. We'll get to that. On top of that, losing Beanie Wells to IR certainly didn't help the situation. Ryan Williams will get the majority of the carries with backups LaRod Stephens-Howling and William Powell filling out the depth chart, though Stephens-Howling will be a gametime decision.

On the Rams' side of the ball, it's going to be interesting to see how the Rams play this one. I assume they're going to revert to more nickel looks given Arizona's inability to run the ball well thus far. Look at Rocky McIntosh's work rate this season:

You can see from this the Rams ran much more 4-3 looks the last two weeks to deal with the running attacks Chicago and Seattle offered. We'll revisit this after the game, but if the Rams can hold off Ryan Williams and company in the first half, I see Arizona going primarily to the pass and a final work rate of about 33% or somewhere around there for McIntosh. Should be fun to keep an eye on.

Now if there's a battle the Rams absolutely have to win, it's here, and I'm talking both running and passing aspects. Arizona's offensive line is...really bad. The ALY and ASR stats above are from Football Outsiders. Advanced NFL Stats ranks them last overall. With Levi Brown out, the tackles consist of D'Anthony Batiste on the left side and rookie Bobby Massie at RT. The early results aren't overly impressive. In each of the two Rams-Cards games last year, Arizona's O-line allowed three sacks. Hard not to see that at a minimum tonight.

With Robert Quinn and Chris Long manning the edges and without a RGIII or Russell Wilson threat to break out of the backfield, I expect them to crash the pocket every play. The question is what kind of play the Rams get at DT. With Eugene Sims out after suffering a concussion, the combo of Michael Brockers, Kendall Langford and Kellen Heard have a chance to show that as good as the ends are, they shouldn't be overlooked.

There's a big advantage here for Arizona. To be fair though, two of the Cardinals' games have been against Seattle and Miami who have pretty poor passing games. The secondary, though, certainly deserves props. CBs Patrick Peterson, William Gay, Greg Toler and rookie Jamell Fleming form one of the stronger CB units in the league, though Gay might be a weak link worth attacking. And unlike the Rams who have plus corners as well but poor safety play, the Cards' pairing of SS Adrian Wilson and FS Kerry Rhodes offers a level of talent the Rams' safeties don't have as well as plenty of experience.

That makes it even harder to forecast the Rams' quadrapolar passing game. We know Danny Amendola will get looks with a heavy workload of slants, digs, and outs as Sam combines three-step drops and rollouts to take advantage of Amendola's quick separation ability. Beyond that? Who knows. Brian Quick, Brandon Gibson, Austin Pettis - I sure can't guess what the Rams will try here. Sure, Chris Givens will probably get a look or two after last week's successful deep pass, but the Rams have to be careful how and when they try those. The Rams were lucky to avoid a big turnover midway through the second quarter on a similar play that got busted up. Schottenheimer's done a solid job of treading the threshold of caution and dynamic passing offense. Given the state of the O-line, I tend to lean a bit more toward the former, but with every play like the Givens completion, it's hard not to swing back the other way.

I noted the Arizona ground game battle might be the most interesting battle tonight. If so, this one isn't far behind. Arizona's done a phenomenal job of keeping four strong rushing opponents in check so far this season. The Cards are stout in the middle of their 3-4 with Daryl Richardson and Paris Lenon, who's much better suited as a 3-4 ILB than he was as the Will in the Rams' system back in 2009. Sam Acho and O'Brien Schofield man the outside spots, though Quentin Groves will get some time when he subs for Schofield in running packages.

As for the Rams, there's talent in the backfield, as has always been the case as long as Steven Jackson's been the starting RB. What's different is that he has a capable backup in Daryl Richardson (who should he be tackled by LB Daryl Richardson tonight will fuse together in some kind of TimeCop matter/space rule manifestation). With Jackson ready to go tonight, I think there might be a chance for a breakout ground game here. Especially given the strength of Arizona's pass defense, I wouldn't be surprised if Jackson and Richardson get a bit more work, especially early as the offense tries to find ways to break down the Arizona defense and get into K Greg Zuerlein's insane FG range.

Look. I'm going to be wary of this unit all year. There's a lack of talent. But OL Coach Paul Boudreau (not to be confused with his son Asst. Special Teams Coach Paul Boudreau) has, much to my surprise, elevated the line's play beyond the horrendous level I would expect it to be play after play after play. A line left to right of Wayne Hunter, Quinn Ojinnaka, Robert Turner, Harvey Dahl and Barry Richardson is, on paper, perhaps the worst in the NFL (though the Cardinals and Steelers would have fair arguments as well).

That being the case, they'll have their hands full with the Cardinals' front three. DEs Darnell Dockett, Calais Campbell and NT Dan Williams can give the best O-lines trouble. This isn't one of the league's best O-lines. I wouldn't be surprised to see some double teams on Dockett. Keep an eye on how DC Ray Horton uses his OLBs, Sam Acho and O'Brien Schofield. If the Rams can find some space to let Sam get some comfortable 5-step drops, the Rams might be able to run a workable offense. If not, well, we might be talking about Greg Zuerlein a lot tomorrow.

This week's top 3 storylines brought to you by three slow news day stories (via): 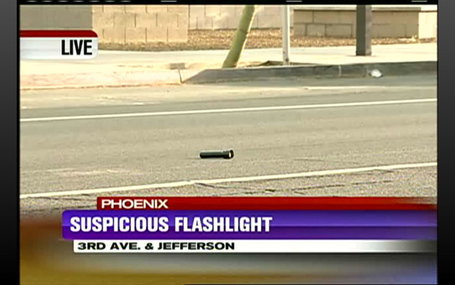 The Rams' can't overthink things tonight. Most of the time, things are what they are. Nothing more, nothing less. This offensive line lacks talent. There's not a true gamebreaker at WR. The D-line isn't built for the run. The safeties are limited in what they can do. 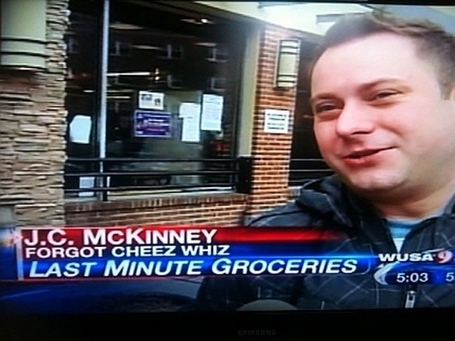 Follow the blueprint. Against the Bears, the Rams mysteriously wandered away from the running game and couldn't develop a semblance of offensive continuity. Not surprisingly, it was the worst offensive showing of the year. Sam finished 18 of 35 for just 152 yards (that's a horrendous 4.34 yards per attempt...) with no touchdowns and two picks. Last week, despite limited results from the ground, the Rams stuck with it. Steven Jackson and Daryl Richardson ran 24 times for just 71 yards; Richardson alone picked up just 16 yards on six carries. It wasn't pretty. But combined with some key third down conversions, it was enough to put Greg Zuerlein in position to break records and give the Rams the win. The Rams' running game is their Cheez Whiz. 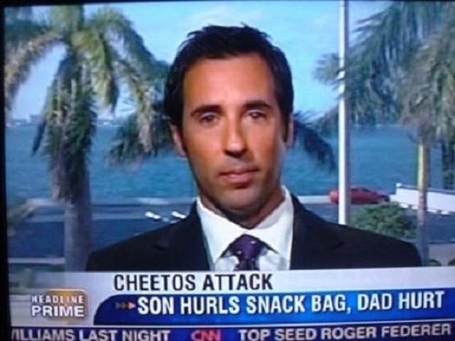 It's not being brought up much right now with the Rams picking up wins early in the season, but the Rams can't afford injuries. Despite having some quality talents across the roster, the Rams are perilously thin. They've made do on the offensive line with Rodger Saffold, Scott Wells and Rokevious Watkins all sidelined. Luckily, Michael Brockers appears to be healthy just as Eugene Sims sits due to a concusssion. Steven Jackson, William Hayes, Wayne Hunter, Brandon Gibson and Danny Amendola are all dealing with nagging injuries, but will be ready to go come game time.

The Rams have been relatively fortunate on this front. They'll need that good fortune going forward if they're to continue to float around the .500 mark throughout the year. So no Cheetos in the locker room, please.