Packers vs. Rams: Five animated keys to the game

How can the St. Louis Rams beat the Green Bay Packers? Let us show you!

Share All sharing options for: Packers vs. Rams: Five animated keys to the game

The St. Louis Rams have had a tough schedule to start the season. Jeff Fisher's team has kept things close in all six of them. Even in those three losses, it was a matter of a play here or there in the fourth quarter that made the difference. A loss is a loss, by three points or 30, but St. Louis' 3-3 record could easily be 5-1.

This week it's another tough game, with a Packers team that is also much better than their 3-3 record indicates. So how do the Rams beat them? Glad you asked.

Yes, we all know about Aaron Rodgers, but stopping his receivers, his many receivers, will be essential to the Rams. Focus too closely one one option, and the Packers will beat a defense with three others. Those receivers can do lots of different things too, according to Rams assistant head coach Dave McGinnis:

"... those receivers are interchangeable. They line up everywhere. They all can play all the positions. They understand it and that is what gives them a great opportunity to run as many plays as they do because it's an at-the-line, quarterback driven. But for it to be quarterback driven, the offensive line has to understand what's going on protection-wise and the receivers have to understand what's going on, route wise and how they fit with each other. So, it's a pretty well-oiled machine when you watch it and it really gets going."

Last week against the Texans, Rodgers threw two touchdown passes of 40+ yards. The Packers do not lead the league in big plays, but they can dial them up at will. St. Louis has allowed just 12 passing plays of 20 yards or more, three in their last two games.

"I haven't been in anybody else's planning room, but Cortland Finnegan's got a track record of what he can do if you start trying to work it over there. He's a proven commodity in this league and, of course, ‘Jenks' (CB Janoris Jenkins) being there on the other side and what Jenks has done and needs to continue to do is to step up and go. But, with this offense that's coming out, as multiple as they are, I don't think they really worry about who's out there covering. They just try to throw to the open guy."

Easier said than done, but the Rams, even their backup linemen, have been able to shutdown powerful pass rushers from Arizona and Seattle in the team's last two home wins.

Offensive coordinator Brian Schottenheimer knows what his unit has to do:

"All-purpose, great player, plays hard, explosive, powerful, obviously a huge part of their defense. He's ruined a lot of games and he's a great player. I don't know if you ever take him out of the game, but you try to limit his ability to make game-changing plays, and that's what we'll try to do."

Opponents have limited Matthews. He has just two sacks over his last four games. Houston kept him, mostly, out of the backfield last week. Complicating things for the Rams is that backup left tackle Wayne Hunter is hurt, missing practice the last two days.

In two of three wins, the Rams have piled up more than 100 rushing yards. Last week in Miami was the first time the team totaled triple digit rushing numbers and lost the game. Green Bay is 0-3 when teams rush for 100 yards or more.

Steven Jackson knows how important it is to run the ball:

"It's going to be very important, not only that we control the clock and convert third downs, but we've also got to score touchdowns once we're in the red zone. Those guys, coming in with a red-hot offense, the performance last week was just stellar. We've got to do a good job of helping our defense out. They've played pretty good all year long. We've got to take some of that load off of them."

More than that even, running the ball will help mask the offensive line and make the play action pass more effective, more believable. 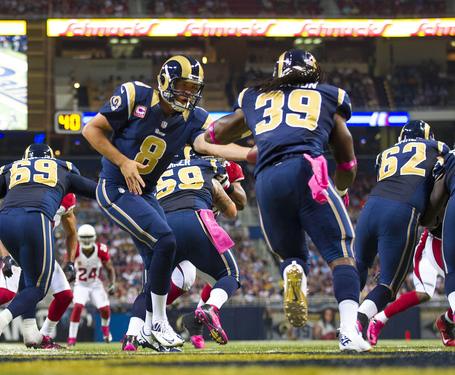 Photo via Scott Rovak - US PRESSWIRE

On the stat sheet, last week's game was one of the best performances the Rams offense has turned in all season, except in the category of scoring, which is kind of the most important part of it. Part of the problem, terrible execution by the offense.

Here's Schottenheimer on the struggles:

"Last week, it was some missed opportunities. We had some penalties. I think we were inside the 30 three different times and had penalties. We overcame one penalty and had another penalty. You can't do that. We had some situations where you put yourself in long yardage situations. It comes down to just execution. It's certainly not just one guy, one thing. It's something that just comes down to taking it one play at a time, executing, not shooting yourself in the foot against a good defense like Miami and that's kind of what we did. That will be a focus for us throughout the week and obviously tomorrow [Friday] when we really get deep into the red zone stuff."

Ok, so there's the game plan ... keep the Packers from scoring points and score more points, should be simple enough, right?