Share All sharing options for: Is St. Louis Rams TE Lance Kendricks ready for the spotlight?

This month is a big one for Lance Kendricks. The St. Louis Rams need their second-year tight end to step up and play a big role in the offense with spark plug receiver Danny Amendola on the shelf dealing with a separated shoulder. Kendricks and his position coach Rob Boras have been working hard to make sure that Kendricks can be that guy, according to a profile in Wednesday's Post-Dispatch.

"He's been playing very well," coach Jeff Fisher said. "His blocking, I think that goes unnoticed. But I was happy that he was able to make that (touchdown) catch. He made a big catch for us (against Seattle) to keep a drive alive down the middle part of the field, so he's coming on. Rob (Boras) is working with him, doing a good job with him. It's hard to take him off the field because of his ability."

The Rams have made him an important part of their blocking scheme since losing Rodger Saffold in the second week of the season. Contrast his role in the Week 3 loss to the Bears versus the last two games. The Rams spent far more time in some bizarre iteration of the spread offense, using Kendricks as an in-line tight end only sparingly. When he's blocking, he's not catching passes.

There is also the little matter of his hands. As the PD piece notes, the Rams are working with Kendricks to improve his ability to catch the ball "out-of-frame" away from his body. Last week's game against the Cardinals had a startling reminder of just why that's so important for Kendricks.

First, let's look at his touchdown reception, the first of his NFL career. 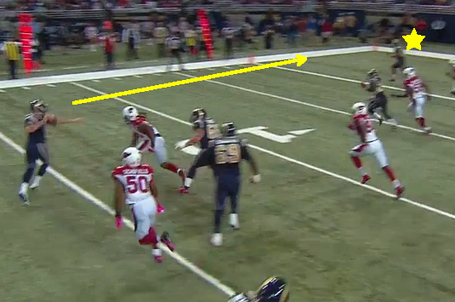 Kendricks lines up on line right next to Wayne Hunter on the left side. Instead of blocking, he goes straight down the field, and takes a sharp left turn to the corner of the end zone. He pushes a linebacker out of the way, and gets himself exactly where he needs to be for the catch. Big props to Sam Bradford on this play. He rolled out to his left with the pocket in shambles and made a perfect throw that Kendricks goes straight up into the air to grab.

Bradford threw just one more pass to Kendricks in that game, because the tight end spent most of his time blocking.

Kendricks comes off the right side, lined up with his hands on the ground next to Barry Richardson. He runs a simple crossing route, and Bradford throws to him on the play action. 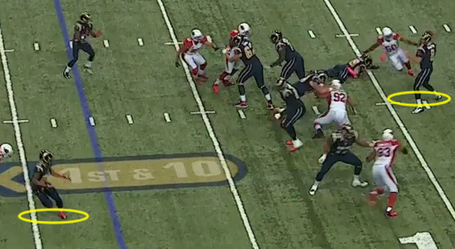 You can't see it in this photo, but Kendricks is pretty position to pick up some yards after the catch, something he worked on during the offseason. He has just one linebacker to beat. The Rams offense really needed some yards here to convert this set of downs, but two more incomplete passes after this one would leave them punting. 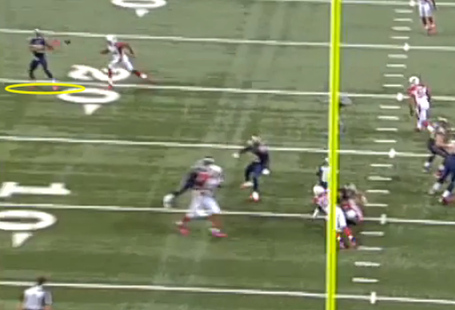 It's a great throw from Bradford, but a ball to the outside is no easy grab for his tight end. Kendricks gets his hands on it, but cannot secure the ball. It's a dropped pass. If he catches it, there's a natural pivot for him to turn downfield and go, popping the defender who is coming in at him.

How far could he have gone with the ball in his hands is hard to say. If he beats his immediate man, first down yardage is not out of the question. Hell, the Rams offense could have used a three-yard gain at that point.

These are the the kinds of plays that make Danny Amendola such a weapon for Bradford. Amendola makes those kind of catches, eating up yards two, three and four at a time to keep the ball moving down field. The Rams need someone who can work the middle of the field with the same acumen as Amendola. In New York, Brian Schotteheimer had Dustin Keller in that role. He really needs to Lance Kendricks to be able to do that as well.