Rams Interview Panthers' Chudzinski; Is He a Fit?

Share All sharing options for: Rams Interview Panthers' Chudzinski; Is He a Fit?

There still isn't any official decision on Jeff Fisher's part as to which team he'll coach in 2012. Word is that he will be making his pick later today – or maybe tomorrow, who knows with this guy.

In the meantime, the Rams have been doing there due diligence, lining up interviews with the Carolina Panthers' OC Rob Chudzinski and Denver Broncos' DC Dennis Allen. 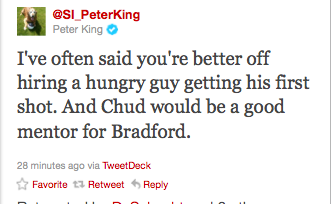 Interesting. Carolina's offense did improve under Chud, ranking 7th in total offense this season after coming in last a year ago. In terms of the passing game, he helped the team get to 13th in total passing yards compared to the dead last in 2010.

The passing game is where the Rams anemic offense needs the most help. The team was 30th this season when it came to passing yards. And you probably already guessed it, we were dead last in terms of passing TD's with a measly nine coming through the air. The Panther's were tied for 13th in passing touchdowns.

With what he's done with Carolina and Cam Newton, is Chudzinski a good fit here?