St. Louis Rams do not expect a blackout for season opener

Share All sharing options for: St. Louis Rams do not expect a blackout for season opener

You can still buy tickets for the St. Louis Rams home game against the Philadelphia Eagles on Sunday, as the splash page on the Rams' web site reminds you. Available tickets conjure visions of empty sections and home game blackouts for Rams fans, but a blackout looks unlikely for the season opener.

Asked about the possibility of a blackout for this week's game, the Rams front office told TST that they expected no problems avoiding the blackout.

After years lost in the wilderness, the Rams finally started reconnecting with their fan base last year. Television ratings hit new records. Ticket sales were up last year too. Even in August 2010, the Rams sold thousands more season tickets than they did the in the previous year. Call it the Sam Bradford effect, call it a franchise that finally had some talent at key spots on the roster. Ticket sales were up again this summer too, despite the lockout. Offering $250 season tickets no doubt helped.

That said, tickets may be available, but not for long. Probably because of timing, also because of the opponent, tickets to the Eagles game are drawing this highest average price among fans, almost $150. 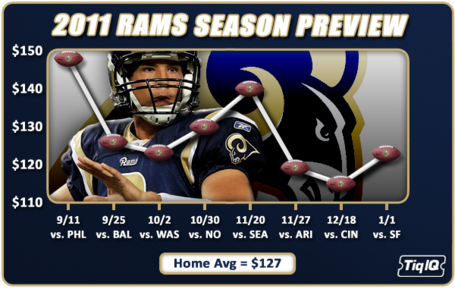 If you're looking for tickets to the Rams-Eagles game, look no further. You can get tickets here through TiqIQ.

Speaking of this week's game, TST is partnering up with former-Ram turned musician Kyle Turley for a pre-game tailgate party not to be missed. I'll have details for you ASAP.