Can the Rams break the NFC West undefeated preseason curse?

Share All sharing options for: Can the Rams break the NFC West undefeated preseason curse?

Another year, another preseason in the books. It was great to have the preseason back, especially with the possibility of there not being an NFL season because of the lockout. Luckily, the NFL owners and players decided to agree on a deal. The lockout made the preseason more enjoyable than it usually is.

The Rams went 4-0 over the preseason this year for the first time since 1979. I'm sure most of the L.A. Ram fans remember that year. For those who don't know, the Rams lost to the Steelers in the Super Bowl that year.

Does that give you some hope that history will repeat itself? Maybe, but I don't think anyone can realistically say the Rams will go to the Super Bowl this season.

In fact, if it's a case of undefeated history, the Rams should be kind of worried. Since the 2002, the other three teams in the NFC West have gone 4-0 during the preseason. How many of the three finished with a positive record? None. Not one. So after the jump, let's see if we can find out why they declined after the preseason. Of course, there will have been other factors that I wasn't able to find; if that's the case tell me in the comments. 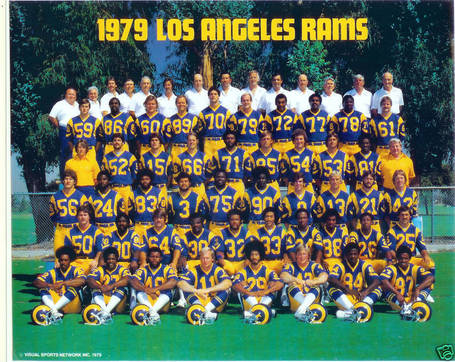 First, let's start by looking at the other teams records after their undefeated preseasons. The Cardinals went 4-12 in 2002, Seahawks went 5-11 in 2009, and 49ers went 6-10 in 2010. The Seahawks and 49ers were supposed to be contenders for the division title those two years. Sounds kind of like the 2011 Rams huh?

Could the St. Louis Rams face the same fate that has befallen the other teams in the NFC West? There is a pretty good possibility of it happening. Honestly, it wouldn't surprise me if the Rams finished with a record south of 8-8. Let's think about this logically.

Sure, the Rams looked good at times, but the teams they played probably won't be playoff teams this year. Who thinks the Jaguars, Titans or Chiefs will make the playoffs? The Rams beat the Colts also, but they usually don't win games during the preseason.

Then you have the lockout factor. It's true that all the other teams had to go through the same thing as the Rams, but who knows how the other teams approached their games with the Rams? To be fair, it's the same excuse you can use for the Rams which shows why you can only draw so much from preseason games.

In the Rams defense, their starters look pretty nice. The D needs more time to gel, but it looks better than last season. The Rams offense also looks exciting, but I just wish they had more time to go over the plays. Even then, the offense looks more impressive than it did last year. The Rams look like they will be a real good team. Hell, even the backups look nice this season. You can tell that depth and competition was a big emphasis this offseason.

If you haven't noticed it yet, the records go up every time a team goes undefeated in the preseason. Which would be good for the Rams, because at 7-9 they can still go to the playoffs...in theory. A 7-9 record most likely won't be enough to win the division this season though, so hopefully they can at least go 8-8.

What might tip the scales towards the curse is the fact that the Rams have a hard schedule. You never know how a team will play during the season, but the majority of the first 8 teams the Rams play are usually good year in and year out.

So will the Rams break the curse and make the playoffs this season? Please share below.