The St. Louis Rams need to get in the win column for the first time this season, badly. With two losses to NFC East teams on their record already, they take on another opponent from that division this week as the Washington Redskins come to town. And what do the oddsmakers think about the game?

Sam Bradford, Steven Jackson and their St. Louis Rams are one-point underdogs to Washington this week. Outside of their pass rush, the Redskins didn't exactly impress with their play on Monday night in a narrow loss to the Cowboys and Tony Romo's broken rib and punctured lung, which may or may not have been as bad as it sounds if you believe Brian Orakpo.

The Rams are healthier and hopefully motivated to erase a terrible start to the season. Oh, and as Andrew Sharp at SB Nation points out, there's also this little motivating factor:

Sam Bradford's 1/16th Cherokee, you say? Tme to exact some revenge on the Evil White Man and his funny nicknames.

And just because we might catch the wraith of free speech hating Washington owner Dan Snyder, let's post the picture that almost got an alt-weekly in DC shut down. 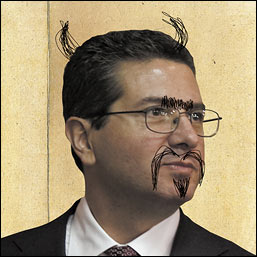