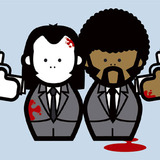 Rams fan since: 1994, when they announced they were moving to St Louis.

Favorite game time food: Although you clearly can't go wrong with wings, my wife makes a pizza dip that is just devestating!

Best Sports Stadium in the world: Although I hate the Sox and Patriots, Fenway is definitely the coolest stadium I have ever been too.

Favorite Rams Player of all time: When I was about 12 years old, I adopted twin kittens. Their names? Marshall and Faulk

2011 St Louis Rams season record prediction: Tough question. We must beat Washington this week, or it all falls apart. I say we do, and recover to 7-9.

About me: I am one of many Las Vegas based Rams fans, believe it or not. I am not a leftover from the days when the Rams were in Los Angeles, however. I lived in St Louis from 1983 until 2005, before relocating first to Connecticut, then here for job related reasons. I've been doing some light nfl writing for a few years now, and am really excited to help out with the picks for Team TST. The TST staff won't know what hit them!