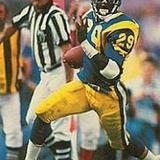 After my stunning defeat of my TST fellows last week, I sprained my wrist from all the Papal waves I offered anyone who looked my way. I had no idea what a Pope goes through until... Anyway, I mean to keep the trend of winning going. To do that, I'm calling out to the TST faithful to join me in the fight against the TST axis of evil led by that sinister overlord Ryan Van Bibber.

Each week, a TSTer will receive a coded (poorly written) e-mail requesting that he, or she, take up the gauntlet againt Team Evil (Ryan's team). True, they get more choices each week than we do. But we have strength in number and... Hey! Wait a minute... Damn the fiend! I should have known something was up when he gave me the choice of either six little picks or THOUSANDS of TSTers who could pick. Well played Ryan...

The first member of TEAM TST is a long time Rams fan. He's currently involved in a "work-in-progress" video project and is a regular commenter in our posts. It is my honor to introduce Taosman to the TST faithful. Here's a bit about him in his own words:

Born in Los Angeles and raised in Lawndale, California, I graduated from Lawndale High School(Fred Dryer gradated from there in 1970) in 1974. I attended my first Rams game at the L.A. Coliseum in 1972 vs. The San Francisco 49ers after winning a paperboy contest. Entered the U.S.M.C. after graduation and left the service in 1979. I served at Camp Pendleton, M.C.A.S. El Toro, Okinawa, and N.A.S. Pensacola. I have a wonderful wife, two grown children, a grand-son with a grand-daughter in the oven.

I consider myself to be a diehard Rams fan who is a realist, patient and knows that sports is a cycle of events, time and Karma. My favorite game ever seen was win against the Seattle Seahawks in 1979 (numerous defensive records set that day).