For our last Q&A prior to the Eagles game, I reminded everyone to ensure they wear protective lenses when staring at Chris Mullin.  Today, in preparation for a Q&A with Ed Valentine from Big Blue View (SB Nation's New York Giants community), let's bring the goofiness back to the Rams.  Ladies and gentlemen, Jack Snow: 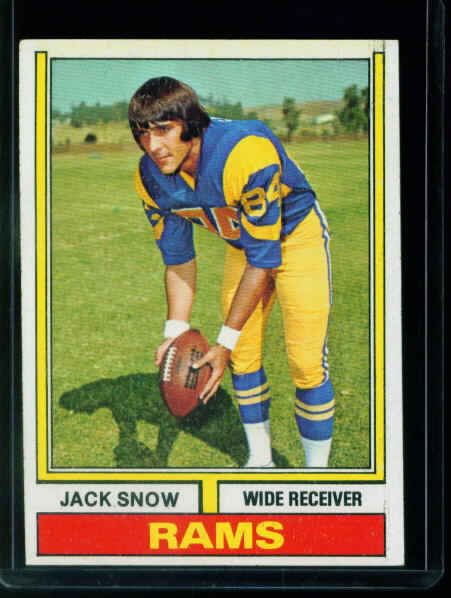 A couple obvious questions.  Why is a wide receiver about to punt the ball?  My theory: Chuck Knox had a secret play in the playbook where the QB would lateral to the WR who would punt the ball downfield to an offensive lineman, but had to remove it from the playbook when this card was released and divulged the inner workings of football's craziest play.  Secondly, why did Snow grow his hair out in the shape of a helmet?  Was he worried he wouldn't be supplied a helmet and would have to apply buckets of Vitalis to protect the contents of his skull?  And where the hell is he?  He's not even on a football field.  I think this was in his backyard.  Some photographer just showed up to his house and he began punting balls at his neighbor's pool.

Five questions with Ed after the jump.

What was the overall assessment from week 1 for you guys?  Obviously the injuries have weighed heavily from the start, but that had to be expected, I assume.  So given who you had for the kickoff, what was the consensus reaction?

The reaction? Not good. The secondary is a huge concern, there is a huge question still as to whether there are any reliable receivers other than Hakeem Nicks and Mario Manningham, the rebuilt offensive line is still developing, the special teams stunk and there just seems to be a lack of passion.

How central is Hakeem Nicks to the offense and to Eli Manning specifically?  He accounted for more than 38.5% of your offensive yardage and more than 45.5% of the passing production.  He's obviously a key factor, but is there confidence that his output could be replaced if he does miss out on Monday?

Nicks is Manning's best and most reliable weapon. Manningham is a good player and a true play-maker, but 2-3 times every game he has a mis-communication with Eli. He's not the most reliable guy when it comes to being where he is supposed to be. Beyond those two guys, no one -- tight ends or wide receivers -- had earned a whole lot of confidence yet.

What concerns are the for the offensive line?  Kareem McKenzie's been there for years; is he starting to show his age?  How did the interior line look against Washington?

The only concern about the line is the limited amount of time it has had to work together. The Giants have a new center (David Baas), new left tackle (Will Beatty) and new left guard (David Diehl, who moved from left tackle). The talent is there, the question is communication and having everyone on the same page.

Defensively, the line combines talented youth (Jason Pierre-Paul and Linval Joseph) with proven linemen (Justin Tuck, Osi Umenyiora and Chris Canty).  Would it be an oversimplification to say that the Giants' defensive fortunes rest squarely on the defensive line's production?

No, not really. The secondary is beat up. The Giants have lost three corners to season-ending injuries and have a fourth, first-round pick Prince Amukamara, out with a broken foot. They lost their starting middle linebacker. Umenyiora is out after knee surgery. Tuck is still uncertain for Monday. All of that said, the Giants defensive line has to win at the line of scrimmage against the run and the Giants have got to get to the quarterback. When they can't, it looks like they can't cover anybody.

The national media are starting to set fresh coals under Tom Coughlin.  Is this something shared by Giants fans/media?  What are the chances this is Coughlin's final season as the Giants' HC?

Oh, it's shared by fans -- and probably some in the media. Whether that is fair or not, I don't know. Problem is the Giants have mostly under-achieved the past two seasons based on what people think of the talent on the roster. TC has the Super Bowl, but that does not give him a lifetime pass. If this season turns ugly for the Giants then -- as much as I don't think Coughlin is the problem -- he could be in trouble.

Thanks again to Ed.  Holler.