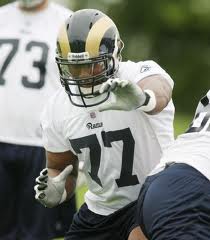 Jason Smith is now entering his third season as a Ram.  He is been a bit of a underachiever as Rams fans were expecting more from him.  After he was drafted 2nd overall he was supposed to be the Ram's next Orlando Pace, but since then he has been moved to RT as Roger Saffold has taken over LT.  Part of that was due to how great Saffold did last season and that should be taken into account.  This year he will have to really step up his game.  His pass blocking and run blocking must improve.  He is very talented though and he has played very well at times.  He just has to provide a more consistent game.  If he improves he will be a great help as he and Saffold will help keep those pesky DEs off of Bradford, which will allow the offense to open up. 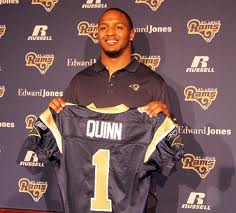 The Rams were very lucky to have a top 5 talent in Quinn fall to them at number 14 in the draft.  He has the potential to be an elite pass rusher in the league.  This year he won't be an every down player, but he will be brought into the game in pass rush situations and be expected to make a large impact.   Some people such as 3k have said that they believe his impact will be larger than I'm putting it at, but in my opinion you can't rank an every down player at the same position, such as Long, over a specialist at that position.  No mater how good that specialist is at his job, his overall impact won't be as great as an every down player.  It's not that Quinn can't be an every down player this year, I actually believe he will take the job over eventually this season.  All in all Quinn will have a huge impact on the Rams defense this year in pass downs.  I'm expecting around 8-10 sacks from him. 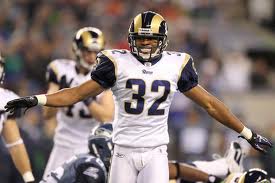 Bradley Fletcher was the Ram who I though took the biggest step forward last season.  He really stepped his game up and became a legit starting corner for the Rams. Right now he and Bartell are two of the most underrated defenders in the NFL.  His toughness and press coverage are his greatest attributes along with the fact that he is a very solid tackler.  He also led the team with 4 picks and he showed a nose for the football.  This year I'm expecting more of the same.  He and Bartell will really help the defense by helping to stop all the good WR in the NFC West (Fitzgerald, Edwards, Crabtree, Rice, and Mike WIlliams.)   Eventually he will be the number one corner, but for now he's the two behind a very good number one. 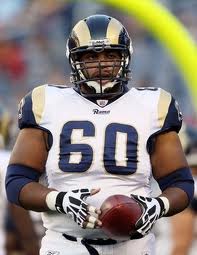 Brown had a down year last season.  Some of this was due to the fact that the rest of the interior line struggled, mainly Goldberg, but you can't ignore the fact that Brown didn't play up to par last season.  This year I'm expecting him to get back to his level of play.  He will be helped a lot by the addition of Harvey Dahl, especially in run blocking.  Brown is a very smart center, who along with Bradford will be responsible for changing the protections.  We brought him in and paid him a lot of money to be a great run blocker and bring stability to the interior line and I'm expecting him to do that this season.  If he doesn't get back on track the line will really suffer. 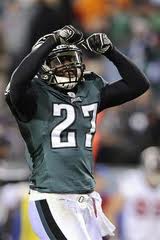 The Rams first FA signing of 2011.  Many were shocked that we signed him so quickly.  We will be looking for him to replace the void left on defense after OJ Atowge left via FA to the Redskins.  He is supposedly a better fit for the Spags system than OJ was.  He is a very versatile safety.  He can play both in the box and in coverage just as well, where as OJ was more of a ball hawk.  He can play FS and SS, a must for a S in Spag's system since both the FS and the SS are relatively the same.  He doesn't make many turnovers, but he still with his understanding of coverages really help the pass defense.  Some would say that I should have him in the top 10, but when it came down to it I can't see him having a bigger impact than the players in my top 10.  That doesn't mean  I don't think he will be important or that he wasn't a good signing.  In my opinion the safeties in Spags system aren't as important as other pieces such as defensive linemen.  He is actually my fifth highest defensive player and he almost was the 4th.

More to come early next week with #10-6.  Thanks for reading.