Share All sharing options for: Thoughts from Friday's Practice 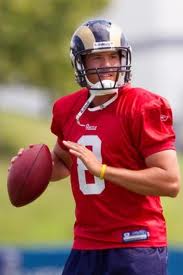 I personally attended Friday's Training Camp practice.  It was a very eventful practice when it comes to injures.  Michael Hoomanawanui and David Vobora both suffered concussions.  Fred Robbins left with a knee injury which seems minor.  Gregg Salas didn't practice due to a sore hamstring.  Robert Quinn participated but not in all the drills, such as live tackling ones.

Most importantly it seems that Jerome Murphy may have broken his ankle.  I was about 30 feet away from the play and I can say when I first saw it happen I though he just slipped and tweaked a hammy.  The point where I got concerned was when he didn't get up for quite a few minutes.  They then brought the cart out and I never saw Jerome attempt to put weight on the leg.  It seems now that he will be out for quite a while.  The Al Harris signing just got a lot more important.

Other thoughts after the jump.

Sam Bradford was a beast.  I didn't see a mistake.  All his throws were accurate and mostly on time.  He hardly missed a pass.  What most impressed me though was that I expected it.  It's been a long time since I was expecting any Rams player to have a flawless practice and they delivered.

Chris Long is unblockable at times.  Jason Smith got flat out beat like a dog 3 separate times that I saw, and it may have been more as I didn't look at the pass rush drills all the times.  On one rush Smith didn't even come close to getting a hand on him.  Now is this just that Long's a great player or that Smith is struggling?  I think it's a bit of both.  Even though Long is a great player, Smith was drafted 2nd overall as well, he should be able to stop a guy like Long.

Rams goal line defense is way better than their goal line offense.  When the Rams did the goal line drill, which is by far my favorite drill, the offense only scored once in a very physical battle.  Not only did the runs not gain yards, they lost yards.  A big part of this was the defense was really pumped up and doing a great job, but when you have the first team offense, minus Steven Jackson, not scoring a TD against the second team defense you have a problem.  Hopefully it gets sorted out.  It's still early but it a thing to keep an eye on.

The first team offense dominated the 11 on 11's.  When Bradford was running the offense they could almost do whatever that they pleased.  It was like clockwork.  It was like watching a well oiled machine.  It was simple.  Even AJ Feeley did well.  He even scrambled for a first down from about 6 yards.  Thaddeus Lewis and Taylor Potts both did okay, though they both threw interceptions.

Now I didn't see much of the WRs, as they were usually on the other side of the field, but of what I saw I thought they did well.  The guys that stood out to me were Brandon Gibson, Austin Petitis, and Danny Amendola.  Gibby made a sweet diving catch, Danny proved why he a slot beast, and Austin Petitis showed some really nice hands and ability after the catch.  Mike Sims Walker did okay in my opinion.  He made a really nice deep catch, but I saw at least two dropped balls from him.  Avery was doing well running routes, but he was working with the second team receivers.  I was disappointed that Salas didn't practice, because he was one of the guys I was looking forward to seeing.

One last thing to me it seems that Spags is letting McDaniels run the offense without much interference.  When the teams split into offense and defense for drills it was easy to tell that McDaniels was running the offense.  Spags was usually on the defensive side, which is expected.  What I noticed was even when Spags was on the offensive side it was Josh who was the one in charge.  I really like that Spags seems to be deferring to McDaniels for offense, even though at the end of the day Spags is the one responsible.

I am looking forward to going to the scrimmage on Sunday and also doing a write-up for that.  For now look for my top players for the Rams #15-11 to be posted later today.

Thanks for reading and GO RAMS!!!