Share All sharing options for: The Prospect Playbook: Andrew Luck

(re-posted from Mocking the Draft.  No, the Rams won't be drafting Luck, but can you rule out any of the other NFC West teams doing so if they end up with the #1 overall pick?)

Everyone's favorite shoe-in #1 overall pick, Andrew Luck, has a bit of pressure to work under this year.  NFL fans will be watching him closely as the Suck for Luck campaign heats up.  He'll anchor a top-10 team that is the second highest ranking Pac-12 team behind BCS Championship runner-up Oregon (the November 12th meeting between the two teams should be a damn good one).  And yes, he tried the 1970s Bill Walton look for most of the summer.  Or is it the Abe Lincoln?  I'm not good with beards.

Forthcoming pressures aside, Luck has established quite the reputation going into his redshirt junior year.  During last year's Orange Bowl, John Gruden showed three aspects of his play that make him such a coveted prospect:

In this edition of the Prospect Playbook, we'll look at the mechanics of his throwing motion (pretty much perfect), I'll tackle the three aspect from that clip in reverse order (accuracy, mobility and falsified movement details), and I'll address what I see as the two major deficiencies in his game (arm strength/deep ball passes and overconfidence).  Bring your beard with you after the jump. 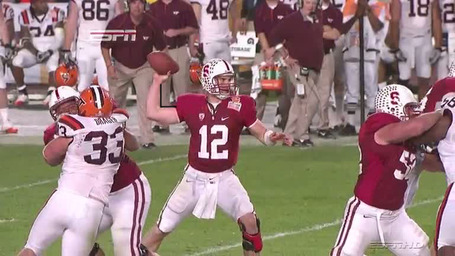 His upper arm and forearm are pretty much perfectly 90°, providing maximum torque as he shifts his weight forward.  He's taken a nice large (but comfortable and balanced) stride with his lead foot, the opposite foot of his throwing arm.  He's still got his chest open to the sideline and will generate the power through his hips into his arm as he turns. 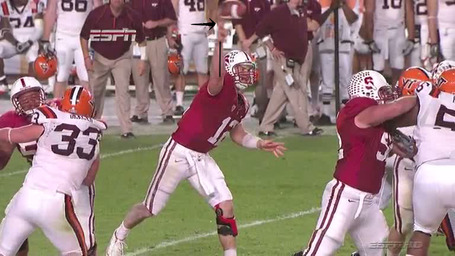 Now he's squared up both his hips and shoulders in sync with the release of the football.  You can see he's coming over the top at about an 89° angle (just to be fair) which allows for the most control of the football.  He releases with his two fingers (see the arrow), almost like a pitcher's release on a fastball - powerful, but controlled.  Again, his footwork is clean, transferring his weight onto his lead foot while remaining balanced. 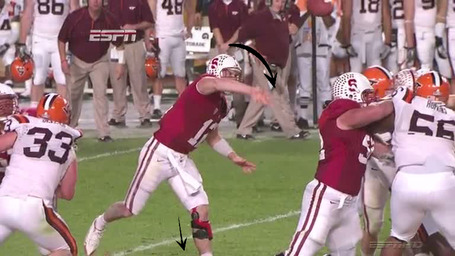 Without pressure, Luck comes over the top with his arm, spinning a tight spiral with those two fingers, and allowing his forearm to complete the 90° swivel without changing the plane of his upper arm.  And you can see he's transitioned all of his weight to his lead foot, pushing all his velocity forward.  Good footwork, clean motion, crisp release - great mechanics.  It's those mechanics that allow him the accuracy he delivers the ball with.

Luck has been one of the most accurate quarterbacks in intermediate and shallow deep throws in the last few decades of college football, along with Sam Bradford and Peyton Manning (yes, just IMO).  Mechanics are great, but performance and tape tell the tale.

Here's his third TD throw from the Orange Bowl:

If you look at the replay that starts at the 0:37 mark, you can see he hits his TE Coby Fleener perfectly in stride up the field and to the outside allowing him to outrun Davon Morgan, VT's rover.  In fact, Morgan nearly trips Fleener up at the 30; had he slowed down to adjust to the throw, Morgan likely would have been able to keep him from taking it to the end zone.  Fleener was his first read, so Luck had plenty of time to assess where he needed to put the ball.  He's also good at making that assessment quickly when he goes through his progression reads.  Here's a play from the Stanford-USC game last year:

You can see that as he's taking his 7-step drop, he's looking at WR Ryan Whalen (#8) who's running a deep inside post (hence the 7-step drop).  Luck sees WR Chris Owusu cross behind DE Armond Armstead into space and immediately makes the throw in space, in stride.  If he waits too long, Owusu will run into S Jawanza Starling who's covering Fleener on the outside.  It's a snap judgment call, and it's the right one.  And yet, despite how quickly he makes the decision, he doesn't suffer any accuracy from the split second call.  Again, if you go to the late replay (about the 0:38 mark), you can see his eyes initially on the weak side before picking up Owusu coming across.

As if he wasn't destructive enough with his clean mechanics and accurate arm, Luck can create plays on the run.  This one's just silly.

Starling has solid position, playing Owusu underneath and to the outside.  Luck's throw, and Owusu's adjustment (though you could make a case for offensive PI here) are the key.  There's no replay of Luck, but if you watch the play again, that Luck could make that throw falling backwards off his back foot is ridiculous.  And it's not just throwing on the run; his vision in the pocket is strong as well.

Luck sees the field open up in the middle and takes off.  Even S Javes Lewis can't get to him before he crosses the goalline.  Yes, he'd be wise to slide feet first in the NFL, but the vision and acceleration are more notable here than the (foolish) courage.  He's better on the move than Brady or the Mannings or Sam Bradford.  That's an added value to his passing game that can't be ignored.  Neither is his commitment to movement falsifications.

No, it's not as simple as just a "fake."  Falsifying movements is everything from the playaction to the draw to the look off to the triple option and more.  It's one of those detailed areas that only the most obsessed technicians master.  Luck is the best I've seen in college... ever.  And I hate making those kind of absolute statements.  The only other time I've gone that far was with Ndamukong Suh; he was the best DT coming out of college I've ever seen, hands down.  But Luck's the best I've seen at falsifying movements.  Check out his playaction skills:

No Ducks buy the playaction...except the most important one: MLB Michael Clay.  Luck's slight handoff fake draws Clay in and opens the middle of the field up for Fleener.  It's a combination of situation (3rd and short, in which Stanford had run it 14 times and passed it just twice) and detail.  Had Clay not committed to the run as heavily, he might have been able to deter a throw to Fleener.  Instead, it's not just a 3rd down conversion, but a touchdown as well.  This next video was my favorite play from the Oregon game, and one that doesn't necessarily stand out from the play by play.

As Luck drops back, his body and head are directed down the middle toward either of the two WRs from the trips right that moved inside.  He knows his WR Griff Whalen has turned to the sideline and is wide open, but he can't telegraph it.  This is discipline and awareness at its finest.  Whalen's YAC depends almost entirely on Luck's salesmanship of the deep middle to the secondary, and it pays off (The boos are unrelated; Oregon QB Darren Thomas had thrown a reviewed INT that was upheld).

Andrew Luck is a hell of a prospect.  The combination of his mechanics, accuracy, mobility and attention to falsification detail are what you want from a college QB.  Still, he's not perfect, despite what ESPN will tell you over the coming months.  There are two areas where his confidence tips over and takes away from his play: the deep ball and passing while being hit.

Luck throws deep balls as if he as elite arm strength - he doesn't .  Don't let the hype fool you.  As good as he is, he won't throw behind safeties with floaters like this:

Owusu has gotten behind the entire defense, and his route leads him into the end zone if the ball gets there.  It doesn't.  Luck's arm isn't strong enough to rocket the ball to the back of the end zone; instead, it forces Owusu to track back as FS John Boyett catches up to Owusu and SS Eddie Pleasant is afforded the time to cross the field and break up the reception.  Yes, Luck could have thrown it earlier to hit Owusu in stride at the point he ended up throwing it.  But having identified his receiver's open window, he couldn't throw it deep enough.  That's a physical deficiency that has to be taken into account.  There's also his overconfidence in making throws while being hit:

Luck tries to get out of trouble as his offensive line struggles to pick up the appropriate defenders.  In doing so, he runs into Va. Tech DE Chris Drager.  A lack of pass rush awareness?  Maybe.  But he had to elude the first two defenders who had collapsed the pocket, and ended up crashing into Drager in the process.  My issue is that he opts not to tuck the ball and accept the sack, instead trying to make the throw through the contact and nearly throwing an interception.  This is where confidence crosses the line and is more about a lack of discipline.  Luck knows he's as good as any QB in the country, but he's still human.  Sometimes, you have to accept a failed play.  This should have been one of those times.

Andrew Luck is a hell of a prospect.  Understandably, as the son of a former NFL QB, his mechanics are on point.  He's made his own mark though, and he'll continue to be one of the more scrutinized prospects for the 2012 draft.  Will he be the #1 overall pick?  Probably.  Judging by what he's done thus far at Stanford, it would be a hard decision to argue with.

I'll try to knock out more of these this year throughout the season and into the offseason.  If there's something you'd like to see more of (or less of), hit me up in the comments.