Share All sharing options for: Craig Dahl on the role of the safety in the Rams' defense

The St. Louis Rams defense is fascinating to watch. I've been back through the Titans game at least two dozen times and I've seen every imaginable variety of formations. I want to go back to my interview with Craig Dahl, who enlightened us to some of the Rams' defensive schemata. Let's just get right into it. Be sure to follow Dahl on Twitter, @CraigDahl43. From there, I'm going to use his insight to breakdown James Butler's third quarter interception. (Here's part one of our interview with Dahl).

How do the safeties work in the Rams defense?

We play a quarter, quarter, half (coverage scheme), really the only concept is a quarters concept that the free safety doesn't play a whole lot. Other than that, We blitz off of both sides, we play two deep on both sides, we roll the free safety down [toward the line] just about as much as, if not more than, the strong safety. It leads to a very interchangeable safety position on our defense.

Some explanation of the quarter, quarter, half concept and lots more after the jump.

In the basic QQH, the corner and safety on the strong side would drop back and each cover a quarter of the field. The other safety, on the weak side, would cover half of the deep field. The strongside linebacker would drop back and cover the flat, and the weakside backer would cover his underneath zone between the corner and the middle linebacker.

The QQH is a more useful alignment against a 3-WR formation, where defenders have to cover the underneath routes. The corners can play the man and let the safeties back them up on the deep routes, or they can go strictly zone. You see the Rams mix in plenty of zone coverage.

With safeties covering as much as half of the deep field, speed is important. That's fairly obvious from the perspective of covering receivers deep, but it also matters because it allows them to make a play on what's happening in front of them. Staying back and watching the play unfold, the safety has to be able to move up to stop plays in front of him or make a play on the ball, just like Butler does on the INT here.

Our defense is based on confusing the offense, especially the quarterback, when they have to make protection sets and what not. We try to show them as much as we can before the snap and try to get to our coverage late in the down. Coaches are always encouraging us to be creative and live dangerously, so whether you see a corner that looks likes he's coming off the edge pre-snap and then he bails in coverage or one that's maybe pressed up and focused on the receiver and at the snap of the ball he blitzes. It's a real interesting defense and when you get comfortable with it and with the other guys playing with you, it really becomes a lot of fun because you can tweak it.

They give you the room to kind of make it versatile and create different looks on your own. and as long as you alignment and assignment are good at the snap of the ball they have no problem with showing different things. Also, we roll an extra safety in on some of our third down packages, so we play with three corners and three safeties, and that provides another aspect to things. A safety could be lined up at linebacker position, blitzing or covering more of a pass catching tight end or a really fast running back out of the backfield, that takes another weapon out of the offense.

Why do you see so many variations of the defense from week to week?

Every week the coaches will come in with kind of a game plan and we'll hit third down and it'll be something totally new that we'll pick up on. The fundamentals of it and the defensive line is always key in our system because without pressuring the quarterback, I don't think anyone could survive on defense. We just try to create mismatches and overload the offensive line, but ultimately a defensive lineman lining up with a tackle or guard and have to beat him on that play in order to sack or hurry the passer. Just showing them different disguises and being able to line up in multiple formations with our third down packages, it just adds another layer of our ability on defense.

Now, let's look at the Butler interception. You certainly see that variation here.

On the strongside, both Poppinga and Darian Stewart blitz. Poppinga shoots the gap between the tight end and tackle. Josh Hull, the middle linebacker, comes up about two steps, and  turns when he see the action moving to his left. The DE on that side makes contact with the TE and loses his footing. Stewart's rush is key. Locker doesn't see him, or at least doesn't buy that he'll blitz. Stewart sells it well, too. Motion on the other side of Stewart from the linebackers helps. 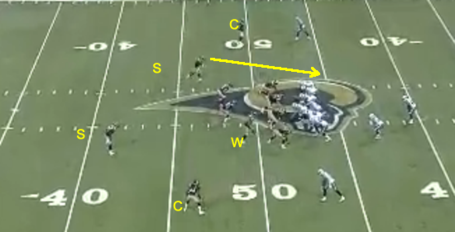 Watch the presnap reads. Leber, on the weakside, cheats up to the line, and while he's doing so Stewart starts to creep in, speeding up when the ball is snapped and coming around the outside of the tight end unmolested. Leber stays put at the snap, reading the play and not biting on the fake. He breaks over to cover the tight end, Locker's target that he overthrows because of the impending hit from Stewart. 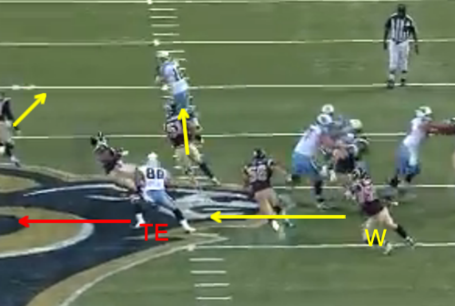 Waiting behind the action is James Butler. He sees the fake, and cuts to his left as he watches Locker roll out, keeping his eye on the ball the entire time. That puts him in the perfect position to catch the overthrown ball. 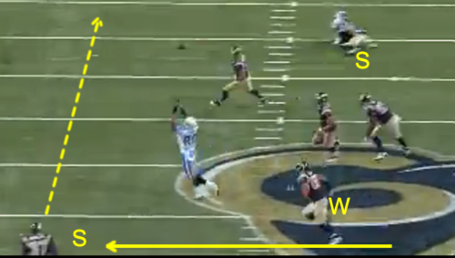 Even without the interception, it's unlike this play would have generated more than a couple yards. By staying put, Leber can see the action unfold, moving with the quarterback after the snap. He's close enough to the tight end, that he probably could have tackled him. If Leber can't make the tackle, Butler is lined up perfectly to make the stop.

Besides the interception, this play is a good example of just how important it is for the Rams defensive to be assignment sound...and why it's so costly when you see examples of that not happening.