Overcommitted: A closer look at a key third down conversion

Share All sharing options for: Overcommitted: A closer look at a key third down conversion

Linebackers have been a frequent topic of discussion following Saturday's game. The St. Louis Rams got burned on the run and misdirection play in general by the Titans. Much of that had to do with the usual preseason foibles, or the kind of stuff that burned  them continually last season. To illustrate, let's go back to a play I talked about on Sunday, a third-down pass from Matt Hasselbeck to his fullback, a play that resulted in a 12-yard gain on 3rd-and-4. 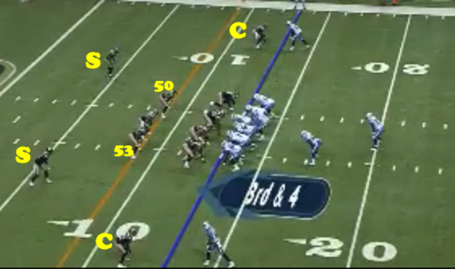 The two corners, labeled "C," are lined up on the receivers, and will press and put them in man coverage down the field. The safety in the upper part of the picture, Quintin Mikell, will drop back a little to patrol his half of the field, as will Craig Dahl. Notice that the linebackers (Kehl is 50 and Diggs is 53) are exactly four yards back from the line.

Lots more after the jump. 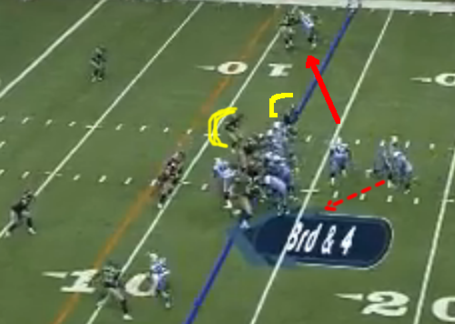 Hasselbeck fakes a handoff to the running back (the dotted line). Laurinaitis and Diggs stay put watching the play unfold. Both will move toward the right. While those two move right, Kehl moves up to the line from the weakside. With another step, he'll get to the line, maybe a foot or two over, and on the inside of Chris Long, the yellow line top of the pile. Kehl doesn't blitz, but he's too far up to stop the action on his side. He has overcommitted and is out of position as result. The FB starts breaking toward the flat. 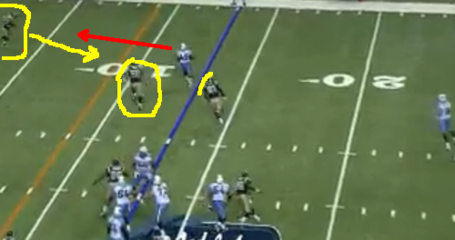 By the time Kehl notices the FB break toward the flat, where he's completely uncovered, he's already lost a few steps on him. Mikell sees the FB and races up to make the tackle, but misses. It slows him down just enough to allow Kehl to catch up and make the stop, one yard in front of the goal line. 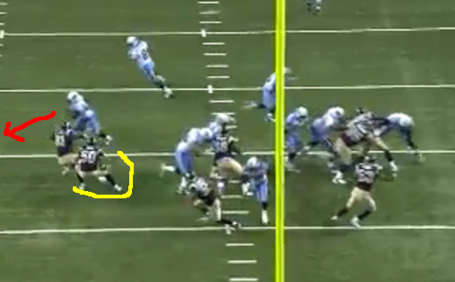 You can see Kehl's disadvantage here. He's trapped behind Long as the FB breaks toward the flat and too far to the inside to see the FB in time to make the stop. Long can't commit to the FB, because he can prevent a QB scramble for the first down. You can see Laurinaitis breaking to his left here too, while Diggs is still committed to the fake.

Kehl is in a terrible position. He's not blitzing, but he's too close to the line to react to a play on that side. I can understand that he didn't need to drop into the flat with just one receiver on that side of the field and a corner in man coverage. He's made a big mistake, and realizes that once he sees Hasselbeck roll out and the fullback break toward the flat.

Too late. Today in practice, Kehl and Diggs watched the starters practice, Ben Leber and Brady Poppinga having taken their place.