Well, the Tennessee Titans are coming to town tomorrow.  It should be an interesting first quarter seeing QB Vince Young try to ressurect...what?  The Titans released him and he signed with the Eagles?  Well, alright then.

Nevertheless, the Titans should still be competitive with Jeff Fisher at the helm.  Really?  Fisher out, Muchak in?  Are these even the Titans anymore?  Wait, Kenny Britt is still getting in trouble for dumb stuff, right?  Ok, good.  I was starting to think this was just a hoax.

A look at the Rams and the new-look Titans after the jump.

For game-related info, check out the SBN page for the game.  For Titans news leading up the game, check out Music City Miracles.

*Statistics won't be available until week 2 of the regular season

Tennessee has great depth here, and I'm a big fan of their secondary.  Obviously, Cortland Finnegan is going to take the headlines for this group, but with Jason McCourty (the twin brother of New England's Devin McCourty), Alterraun Verner and veteran journeyman Frank Walker, the corner spot is not a huge concern for Titans fans IMO.  BTW, what is the threshold you have to cross to earn the journeyman moniker?  There should be an NFL rule that says X teams in Y years makes you a journeyman.  Get to work, Goodell.  I guess I should note that Michael Griffin, Tennessee's starting FS, is a beast.  I got to see him in high school back in 2002 in Austin, and he had the size to make it happen.  It's always interesting to see those guys go from 18-year old high schoolers to NFLers.  In any case, if he's on the field, he makes a difference.  Two Pro Bowls, son.

On our side, the injury report will be interesting.  Donnie Avery could return, Mike Sims-Walker might be healed up, and Greg Salas could all be good to go.  What else is there to say at this point?  I guess I'll just note that if Bradford has a good run of it and Kendricks shows up again, this place could be swamped with optimism.

This unit had a hell of a game against Indy last week.  Cadillac Williams, Keith Toston and Jerious Norwood combined to run the ball 30 times for 141 yards.  So the real question here is not whether Steven Jackson plays or not.  It's whether the O-line allows this unit to be as productive as they were against the Colts.  Nevertheless, the running backs (especially Toston) did a fine job.

Tennessee's run D has a combination of veteran experience (Will Witherspoon, Barrett Ruud) and rookie talent (Akeem Ayers, Colin McCarthy) that should provide a stronger matchup in run D than what Indy offered, though Ruud will probably sit this one out.  Keep an eye out for Rennie Curran.  Good guy, hard player, technically sound...but too small.  He was a quality player at Georgia, but I'm unsure he'll be able to hold up in the NFL beyond a reserve role.

Defensively, the Titans have some questions to answer as to what kind of defense they're crafting post-Jeff Fisher.  Fisher played a traditional 4-3, but drafting Ayers and Jurrell Casey suggest a bit more creativity in the waiting for the Munchak-led Titans.  Look for Karl Klug beyond the starters.  An Iowa product who is too small for an NFL DT, his skill set may keep him in the league for a while.  Plus, he's got really tiny arms.

The combo of Matt Hasselbeck and rookie Jake Locker provide a worthy preseason test for the Rams' D, though without Kenny Britt (or Chris Johnson), it's not a full examination.  Nevertheless, there's talent at the QB position.  Hard to say that about their receiving corps.  I'm not a fan of the Titan's options at WR, but no team's perfect.

The question for the Rams is health.  Going into the Colts matchup, there was legitimate concern about how the Rams would even field enough bodies at the position to ensure Bradley Fletcher wasn't playing into the 3rd quarter.  This could be the most important part of the injury report.

Chris Johnson's still holding out, and Javon Ringer's likely to sit out, so this certainly isn't a position of strength for the Titans.  They'll get a chance to try some guys like Stafon Johnson, Herb Donaldson and rookie Jaime Harper.  I liked Harper coming out of Clemson, and as a fourth round pick, there are some expectations there to help CJ once he rejoins the team.

The Rams had some issues in run defense last week, especially dealing with Darren Evans.  I thought Josh Hull did a pretty good job.  Will Laurinaitis return?  I hope not.  Give him another week off, and let him get back to 100% as soon as possible.

Another Titans group, another player I had a high school scouting report on: Troy Kropog.  I've got a cousin in Louisiana who loves football as much as I do, and hooks me up with some intel on New Orleans and Baton Rouge area guys, and he let me know in no uncertain terms that Kropog had the size, but not the skills to dominate.  It's not like Tulane is churning out great talent...  Weird fact of the day?  Kropog's high school state motto:

To give one's life for the sheep

Guys, sheep really aren't that cool.  Ok, back to real talk.  The Titans offer up an anti-Rams O-line with power blockers instead of technical pass protectors.  Guys like Michael Roos and David Stewart on the outside are bigger than Eugene Amano, their center.  Strange group, but definitely big enough.

That should give the edge to guys like Robert Quinn and George Selvie - quicker, more athletic ends who should be productive in the passing game.  Chris Long and James Hall could have trouble early on dealing with guys who can overmatch them in the strength game.  Into the second half, let's be honest - I don't know who's on the Titans' practice squad, and neither do you.  So let's make a stupid random prediction: Damario Ambrose is going to have a monster game.

This week's top 3 storylines brought to you by things people in China people do, apparently

1.) They throw chairs at our young, upstanding collegiate scholar-athletes

This thuggery shant stand.  Those exact words were uttered by Roger Goodell to Kenny Britt.  Until he comes back, the Titans' offense is grounded, and that's ignoring the holdout by their star RB.  Couple that with a Hasselbeck-Locker combo, which is like putting Father Time with a hyper 3-year old and you can see this train coming off the track in year 1 under Munchak.  Just don't throw water bottles at each other.

2.) They push journalists out of the room when our Vice President is speaking

Actually, this isn't a bad idea, but it's a little wacky.  But the pushing and shoving needs to continue for our offensive line.  They made a statement against the Colts, and there's not a fan of the Rams who wouldn't want to see them repeat that performance.  The Rams' O-line I mean, not Chinese security officials.

This is just weird.  I don't know how to segue this one.  The Rams need to force the rest of the league to suckle at our teat.  No...  Spagnuolo and the training staff should look into genetically modifying the defense to... no.  How about a reminder that cows are without question the dumbest animals on the planet, and noting the Rams need to force their opponents to make unintelligent decisions with their play? 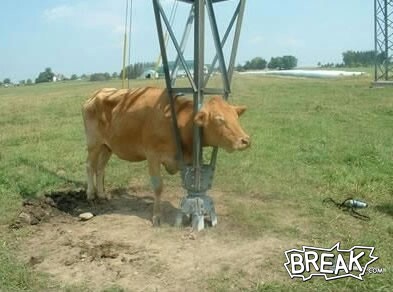 Works for me.  Holler.