Van kept the season recap going last week with the Week 2 game against the Raiders.  If masochism is your thing, just read it a couple times.  It's the kind of road game playoff teams win.  That the Rams lost that game in the fashion they did set up a pivotal week 3 home contest against the Washington Redskins.

Think about the momentum.  A 1-15 2009 season.  An 0-2 start even with wonderboy Sam Bradford at the helm.  Pat Shurmur's insomnia-killing offense.  Things weren't moving in the right direction.

The Rams would go on to beat the Redskins handily in front of an agitated home crowd.  Despite losing Steven Jackson in the 2nd quarter to a groin injury (photo evidence in the breakdown), the Rams would grind out the game on the ground.  Two weeks after the Rams posted a 55/24 pass/run ratio, it was all about balance against the Redskins.  By the final whistle, the Rams had passed the ball 37 times and run it 37 times as well.

A look at how it went down after the jump.

- After a quick 1st down pass to Fendi Onobun (I can't believe I just typed that), Adam Goldberg made his presence known.  Lined up against former Ram Adam Carriker, Goldberg stood completely flat-footed as Carriker raced by to snag Sam Bradford's arm in the midst of his throwing motion.  Yay.

- The Rams Shurmured their way to a 4th and 1 at the Washington 40.  The interior line would get a huge push (foreshadowing), and FB Mike Karney would plow into space for a 1st down: 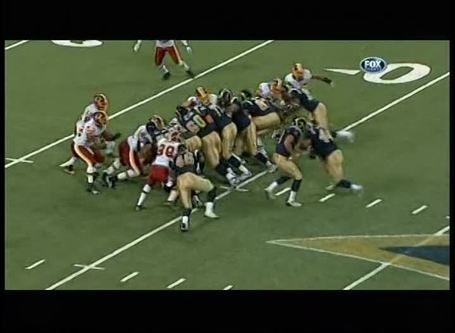 - Two plays later, the Rams would benefit from Steven Jackson's longest run of the season.  On 2nd & 14 from the Washington 42, Jackson would head to the strongside.  A key block from TE Daniel Fells gave Jackson room to the outside: 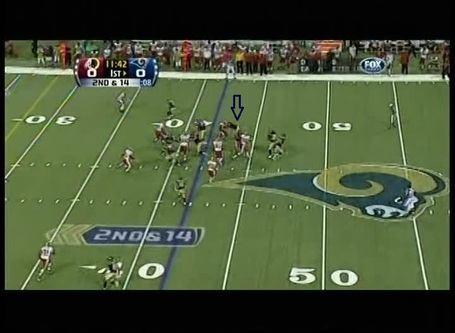 As Jackson slid around Fells' block, he had a second lane created by RT Jason Smith.  Smith, denoted by the upward-facing arrow (which sounds like a yoga position), takes LB Rocky McIntosh completely out of the play.  The downward facing arrow shows Fells completing his block on DE Markus White: 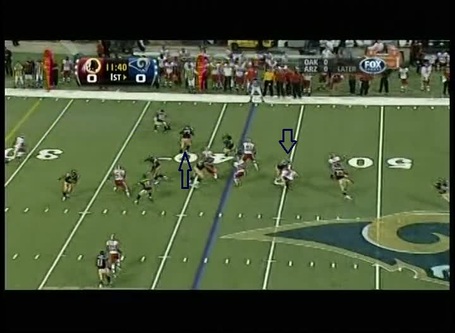 After a great cut to the inside to escape a diving tackle attempt by Chris Horton (I think), Phillip Buchanon had the last shot at saving the touchdown.  Brandon Gibson would provide the last block to spring Jackson toward the end zone: 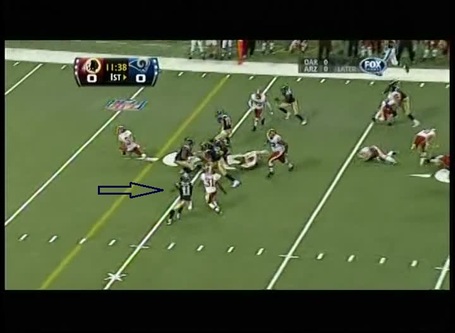 Seven quick points, and the Rams had taken early control of the game.

- The Redskins would quiet the crowd with two quick passes for a first down, but the Rams would get the crowd back on their feet with a huge play.  After an illegal clip block by Santana Moss, Donovan McNabb would find his top receiver on a crossing route.  Larry Grant would strip the ball from behind, and as Na'il Diggs hit Moss, the ball popped free... 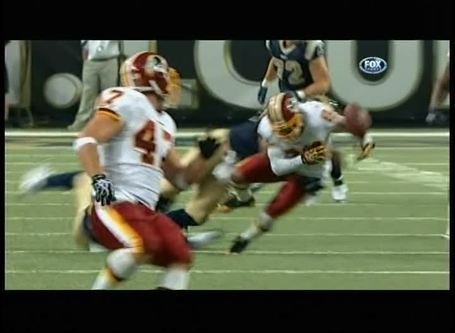 ...right into the hands of James Butler: 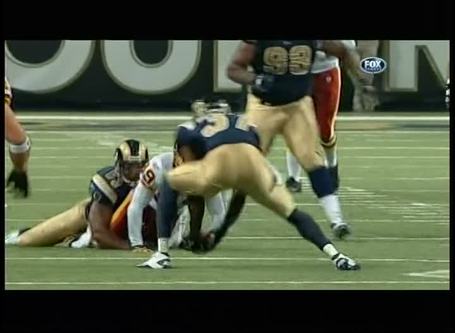 Butler would return the ball down the sideline to the 3-yard line, and the Rams were in position to take the game over.

- On second down after a poor run, Bradford would hit Fells on a simple boot that was far too savvy for most rookies.  VTRamsFan broke the play down following the game.

- Things were going spectacularly for the Rams.  Up 14-0, the Rams would force a three and out to bring on the punt team.  Dominique Curry would earn his stripes as a special teams, uh, specialist by blocking the punt.  Things were going great.  But then Adam Goldberg happened...

- On the first play following the blocked punt, Adam Carriker would take Goldberg off the ground, overpowering him out of his stance.  To try and save himself (and his QB), Goldberg would keep a hold of Carriker, pulling him to the ground with him.  The flag for offensive holding wouldn't matter.

As he pulled Carriker down, Bradford couldn't step into his throw, and the ball sailed well over Mark Clayton and into the hands of S Kareem Moore: 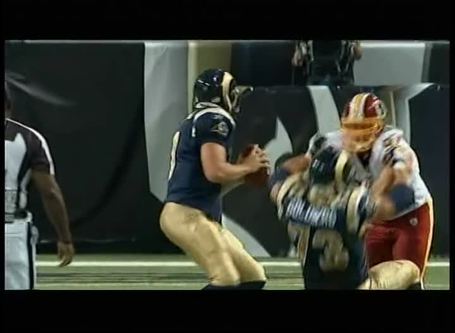 May our kids be safe from a future that includes the Adam Goldberg Football Camp.  I know I'm piling on him, but holy shit he was bad last year.

- The momentum that the Rams had built up quickly evaporated over three plays.  The Redskins' offense was stalling out yet again, but Bradley Fletcher committed pass interference on a deep pass that took Washington out of their side of the field and into the red zone.

- Opening the second quarter three plays later, Chris Long got great pressure on McNabb who, forced to throw or be sacked, has his pass tipped by Fred Robbins.  The ball floats right to O.J. Atogwe who drops the INT as he's hit by TE Chris Cooley.  The Redskins would convert the field goal.

- On the ensuing kickoff, Mardy Gilyard would fumble the return.  Between the pass interference, the dropped INT and Gilyard's fumble (which led to an embarassing touchdown pass to Santana Moss on the first play), the Rams had squandered the momentum and much of their 14-point lead

- The Rams wouldn't do much on the next possession, giving the ball back to the Redskins rather quickly.  A huge run and a very questionable defensive holding call on Ron Bartell put the Redskins right back in the red zone.  Graham Gano would convert, and the Redskins had turned a 14-0 game into a 14-13 contest in roughly four minutes of play.

- The final drive of the half (minus McNabb taking a knee) was as bad as it could be going into halftime.  The Rams drove the ball the way Pat Shurmur's offense was supposed to - a screen pass here, a run there, a short slant, a hitch, another run...it was working, albeit slowly.  Then this happened: 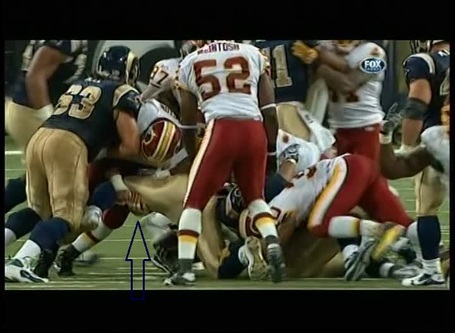 Uh, that's painful.  And dirty.  Shame on you, Kedric Golston.

- With Jackson sidelined, the offense would go into full Bradford mode...and it worked.  Following the injury, Sam went 5 for 6, throwing to 6 different receivers, capped by a nice sideline pass to Mark Clayton who was pushed out of bounds just short of a touchdown.

- The Redskins had the momentum now, and they would capitalize in painful fashion.  McNabb would air it out deep for Santana Moss who had gotten behind Bartell and outside of S Darian Stewart in the Rams' zone defense.  Stewart would take a horse collar penalty to save the TD.

- Thankfully, the Redskins would go to the ground and run the ball three times for a total of 5 yards.  1st and goal at the 8 became 4th and goal from the 3.

- After the field goal (and 16 unanswered points by the Redskins), the Bradford-led offense engineered a similar drive to the one at the end of the half, but with an entirely different result.  Sam would go 5 for 9 on the drive, with a great run for the TD to cap it off.  (Also, Bradnon Gibson was struggling to catch anything at this point.  He had a reception and two embarassing drops on the drive)

- Set up by...I can't believe it...a block from Adam Goldberg, Darby would squeeze through the hole and escape a diving tackle attempt by Kareem Moore to burst into the end zone and regain the lead for the Rams. 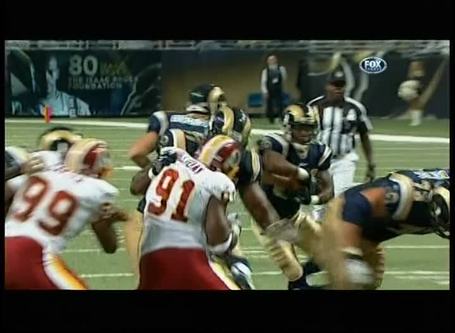 In a single picture, you have the Goldberg block.  Head down, barreling ahead hoping to block something.  Someone.  For a play, for this play, it worked.  Thank God.

- The second half was purchased by the Rams' defense - they owned absolutely owned it.  After a first down run by Ryan Torain went for negative yardage, a good playcall would isolate Laurinaitis on second down, forcing him to choose to wheel with Chris Cooley or jump down on Clinton Portis.  He chose the former, so McNabb threw to the latter.  The next three plays were defensive gold.  The Rams would defend the deep pass on 1st.  Laurinaitis would fill a run gap perfectly on 2nd, and on third the defensive end pressure by Chris Long and C.J. Ah You would force McNabb to rush a throw to the outside.

- Both teams would trade 3 and outs during a forgettable stretch of football.  Bradford was 2 for 2 for 8 yards (oh, Shurmur) while McNabb was 0 for 3.  St. Louis was bringing the pressure on 1st and 2nd.

- Oddly, the next Rams drive was all about Darby.  After a Toston run preceded a Gibson reception to set up a fresh 1st down, Darby would run the ball 6 times in a row.  And it was working largely because...

- ...John Greco had replaced Adam Goldberg at RG.  You couldn't make a bigger difference with a single substitution unless you took out Bradford for Thad Lewis.  Check out the first play of the 4th quarter.  Greco is going to take on Carriker (who had given Goldberg trouble all game): 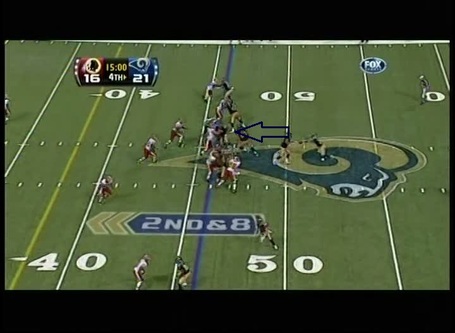 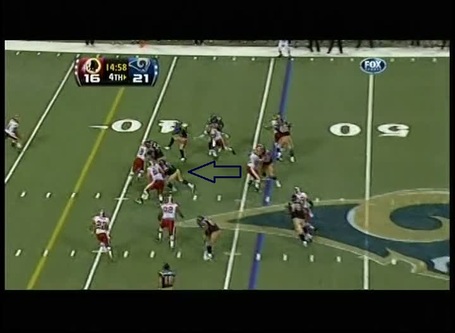 Greco and Jacob Bell, who pulled underneath to take on LB Rocky McIntosh, were all Darby needed on this 13-yard run.  I'm really hoping I see some bad tape on Greco over the coming weeks to justify his absence down the stretch.  He's a much, much more productive guard than Goldberg is.

- The drive would fizzle out as Bradford threw two incompletions to Amendola and Gibson, respectively.  Josh Brown would hit the 37-yard FG.

- Again, the Rams D stepped up.  After offensive holding and an 8-yard pass to Moss, the Skins were sitting on a 2 and 12 from their own 25.  The Rams would blitz their Mike and Will from the 4-3; Laurinaitis came through untouched.  McNabb was elusive enough to avoid the sack from Lauriniatis, only to find himself on the ground thanks to James Hall.  A harmless dump off would bring the punt team back out.

- Amendola would get a nice return on the punt taking the ball to the St. Louis 48.  It was all Darby, Toston and the O-line after that.

- Seven out of the 9 plays on the drive were runs, and the two that weren't were called runs that Bradford audibled out of (including a WR screen to Clayton for 30 yards).  Greco and Brown stood out on the drive, opening up the middle for the two healthy RBs.  A 29-yard FG made it 27-16 St. Louis with just 4:22 to go.

- Washington shot themselves in the foot again.  After Cooley earned a first down, the Redskins made their task that much harder with a false start.  Gary Gibson would tip McNabb's pass at the line.  And then this: 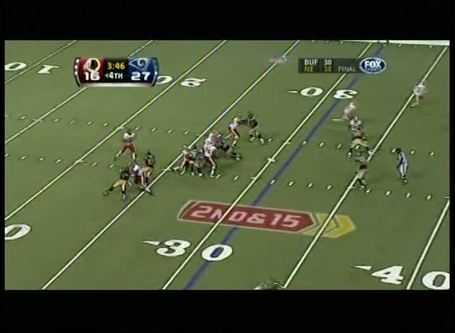 - That's Bryan Kehl who was in as the Sam nickel LB with Laurinaitis at the Will.  Kehl blitzed and had a free lane to McNabb; instead of taking the sack or throwing it away, McNabb would throw it too early for Moss to break on.  Bradley Fletcher, on the other hand, watched the ball all the way in for the interception.

- The Rams would run the ball six times to kill out the clock, passing just once - an incredible 3rd and 20 conversion to Mark Clayton.  Josh Brown would boot another FG for a 14-point lead.

- It was bizzaro world for the last few plays.  As the Rams dropped guys 15 or 20 yards deep to negate any big play, the Redskins played Shurmur's sloppy seconds, dumping off to receivers 5 or 8 yards beyond the line of scrimmage.  The Rams did a great job of tackling from the sideline in, and the clock kept running play after play.  The clock would hit zeroes before the Redskins were in the red zone.  McNabb took just one shot at the end zone.

- And with that, the Rams had won a damn football game.  Forget 1-15.  The Rams were 1-2 and had a season in front of them.  With Bradford at the helm, things were finally moving in the right direction.