The PBP: Robert Quinn and the pass-rushing DE

Share All sharing options for: The PBP: Robert Quinn and the pass-rushing DE

It's been a while since we last visited the Projector, but it's time to add to the first four pieces in the series.  Today, we'll look at the pass rush for the 4-3 right defensive end (RDE), and why Robert Quinn is tailor-made for the position.

So defensive ends are the topic du jour.  And while ends do have an important role in run defense, we're only focusing on pass rushing today, the prime responsibility of the RDE.  But why does the right end enjoy the glory of pass rushing over the LDE?  The answer is relatively simple - history and evolution.

So instead of rehashing 80 years of football history, let's just get into the modern 4-3 RDE, a pass-rush beast.  Think of Dwight Freeney, Jared Allen, Julius Peppers, Mario Williams or John Abraham - all sack artists, all RDEs.  So what is it that all great 4-3 RDEs have in common?  What traits distinguish them from their peers?

There are plenty of matrices that evaluate ends on all kinds of data, but I'll condense it into three specific areas: explosion, hands & shedding, and speed or finishing burst.  You could argue those three chronologically make up a sack.  You get off the line, lose the blocker, and sprint to the QB for the sack.  That's pretty basic, no?  Before we get to would these traits should look like, let's look at what they shouldn't look like.  And where better to start than with our Rams.

Let's take it back to the street...Sesame Street.  Which one of these is not like the other? 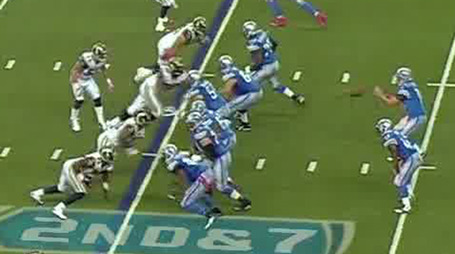 That would be your RDE pass rushing specialist.  Notice the three other defensive linemen (C.J. Ah You at LDE, Fred Robbins at LDT and Jermelle Cudjo at RDT) are already out of their stances as are all the offensive linemen.  The only lineman on either side who still has his hand in the ground is Eugene Sims at the RDE spot.  And that's how you get this: 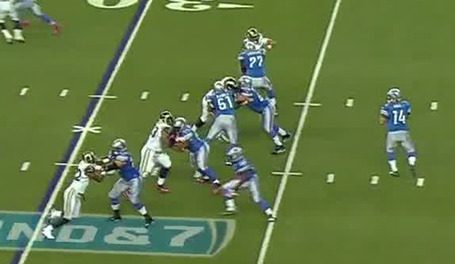 The other three defensive linemen have gotten anywhere between 2 and 4 yards behind the line of scrimmage.  Sims, on the other hand, is barely beyond the initial point of contact.  Just by getting off of the line too slowly, he has effectively taken himself out of the play and reduced the Rams' defensive capability on this play by a significant margin.  To summarize: this not good.  Go faster.

This is a two step process.  The best defensive linemen will prevent an offensive lineman's block from setting into their chests by using their hands to swat away the offensive player's arms, or isolating their arms with a move (i.e. swim, rip, etc.).  If the offensive lineman does get his hands into the defensive player's chest, shedding the block is necessary for the end to have an impact on the play.  Again, let's check out how this is not supposed to look, this time with a video clip.  This time, it's George Selvie (#90) lined up at RDE:

Notice how deep his inside move is; this allows LT Levi Brown to lock Selvie up when he does try to move outside (although having to deal with Stephen Spach on the double team doesn't make things any easier).  While Selvie does get a good push from his pad level, Brown has him completely locked up and Selvie is entirely unable to shed the block to get at Anderson.  This allows time for RB LaRod Stephens-Howling to come out of the backfield, which pulls S Craig Dahl away from WR Steve Breaston.  You can't give any quarterback that much time to sit comfortably and scan the field.

The final aspect of the pass rush from the RDE spot is the ability to close.  Having jumped off the line at the snap and eluded the left tackle, the RDE has to identify the proper line to the quarterback and use the utmost acceleration to complete the sack.

The failure here can be a confusing clip.  C.J. Ah You, lined up at LDE, is going to get a strong jump off the snap.  He'll knock RT Anthony Davis' hands down with a strong swat move.  The rest is what makes C.J. Ah You a situational player instead of an everydown lineman.  He lacks another gear to get around Davis, lumbering deep behind the pocket to earn enough space to come from behind QB Troy Smith for the sack:

As Tim Ryan notes, Troy Smith should have gotten rid of the ball.  The real takeaway, though, is that despite Ah You's quick nullification of Davis, he takes far too long to get to the QB.  A good DE, RDE or otherwise, closes quickly from the edge, showing a burst of acceleration to go from the tackle's hip to the quarterback's chest.  Now, let's look at some success stories, all from Robert Quinn.

First up is a play from the UNC-Georgia Tech game from 2009.  It's a 3rd down and 9 for a Georgia Tech game that relies heavily on the run.  Heavily is actually an understatement; in this game, the Jackets would run the ball 69 times and throw it just 11 times.  Ah, college football.  In any case, this is an opportunity for Quinn (#42, RDE) and Quinton Coples (#90, LDE) to show off their skills on a relatively obvious passing situation.  First, let's take a snapshot of the jump: 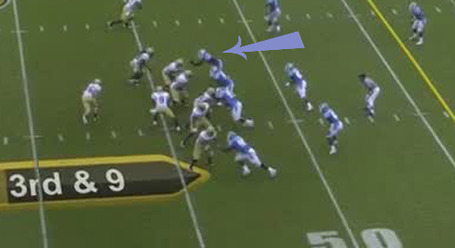 Quinn, who I identified with the giant arrow, gets a great jump along with Quinton Coples on the opposite side.  A great key to identify the value of their jump is that they've both got their down arms in front of them.  This is key to avoid being bottled up at the line.  For Quinn, the jump allows him to knife inside the line and force QB Josh Nesbitt to throw a bubble screen to the backside where the receiver awaits a handful of tacklers.  Quinn's effort doesn't show up on the stat sheet, but it forces the ball back into UNC's hands.  Here's the play:

It's not the kind of play that ends up on the highlight reel, but you can be damn sure the coaching staff appreciates it.  Negating the first look on a 3rd down pass play just by getting off the snap quickly?  That's a plus.  Next up, shedding the block.

This is just ridiculous.  Granted, Georgia Tech LT Brad Sellers never made it to the professional level, but for Quinn, this is highlight reel material.  He'll get a solid jump off the snap, and then the clinic begins.  Quinn applies a perfect shoulder rip, curling his inside (left) arm under Sellers' outside (right) armpit.  By doing so, he gives himself all the leverage to control the point of attack.  To make matters worse, he knocks Sellers down with just his right arm, giving him a free lane to the QB.  He forces Nesbitt to step up into Coples' lane, but just watch Quinn operate:

That's perfect technique, and it's the kind of move that translates well to the NFL.  He may not be able to employ it as often as he did in college, but if he can work it in weekly just to get it in the mind of the tackles he'll face off against, it'll pay blatant dividends.  The final clip looks at Quinn's closing speed.

I'll just throw out a simple numerical comparison: 7 vs. 5.  In the failure clip, where Ah You gets the sack, he takes seven steps to go from the edge to the QB.  Here, Quinn takes just five against a pro-level LT in Pitt's Jason Pinkston to rush QB Bill Stull (though Stull still tosses a great loft pass that should have been a TD):

Unlike the Ah You play, where he gets a sack due to early coverage, Quinn doesn't get the stat because Dickerson is allowed to work downfield, though he is interfered with.  The key is replacement value.  Consider that Quinn gets to the QB quicker than Ah You does in the fail example.  Replacing Ah You's pursuit with Quinn's means less coverage time needed.  The effect that has on a defense, especially when applied consistently, has as much impact if not more than any other factor.

The goal is not to record a sack on every single play.  The goal is to change the play, to force the quarterback to do something uncomfortable (see: Marc Bulger in 2008).  Forcing an errant throw, throwing the ball away, dumping it off to a shallow receiver - all of these are the benefits of strong pass rush.

That's what Robert Quinn brings to the Rams - a singular ability to get out of his stance quickly, use his hand technique to disable the blocker, and close in on the quarterback in as little time as possible.  The potential to change the Rams' defense for the better is obvious.  Hopefully, when the lockout ends, we'll see that potential translate into production with Quinn in a Rams jersey.