Hat tip to nickdora28 for the first related posting, but this warrants some discussion.

For the next installment of the preeminent football video game series, EA Sports has partnered with ESPN to allow the next cover to be chosen by the fans; you can vote here. Every team in the NFL has a horse in the race, and to be honest some are pretty pathetic.

Seattle is apparently so without personality that their selection is the 12th Man. That's kind of insulting if you're a Seachicken fan, no? And how is Danny Woodhead the Pats' choice over Brady? Probably the most insulting is poor 1-15 Carolina's option: Jordan Gross. Salt, meet wound. Of course, the Rams' slot is held by Sam Bradford; in the first round of the voting process, he's going up against Larry Fitzgerald, who already has a cover on his resume albeit one he shared with Troy Polamalu

The real question is if you believe in the dreaded Madden Curse. Larry Fitz himself certainly isn't a disbeliever:

A string of injuries, performance dips and off-field trouble for cover athletes such as Michael Vick, Daunte Culpepper and Shaun Alexander have prompted widespread belief in a "Madden" cover curse. Sandoval scoffs at the notion. Arizona receiver Larry Fitzgerald does not. Last year's "Madden" cover featured Fitzgerald and Pittsburgh safety Troy Polamalu. When the latter sprained his knee in the first game of the season, the former freaked out.

ESPN's video game blogger (a position I just found out exists) takes Bradford over Fitzgerald. It's probably a moot point, as anything you throw open to a vote on ESPN is going to end up in the Patriots/Jets tunnel of Northeastern vaingloriousness (see: Rex Ryan or any ESPN NFL commentator for the Pats' bias), the Cowboys' maelstrom of self-righteousness or the Steelers' fake legacy of everymanism. So don't expect to see King Sam on the cover of this year's installation.

But had he an actual chance of being on the cover, would that worry you? Is the curse real?

Unfortunately, the cover I want to vote for isn't an option: 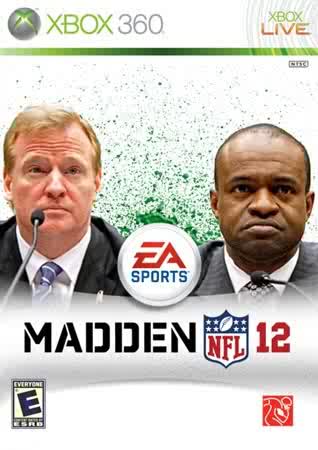