When the Los Angeles Rams took a flier on wide receiver Drew Hill in the 12th round of the 1979 draft, they knew they were getting a 5'9" player with excellent speed.

It was also a long shot that he'd make the team, having spent much of his time at Georgia Tech University blocking for running back Eddie Lee Ivory.

Ivory was the Green Bay Packers first-round draft pick that year. Offensive linemen Kent Hill and Roy Simmons were the only other Tech offensive players drafted that year.

Kent Hill happened to be the Rams first-round selection and would be Drew Hill's teammate his entire career except for the 1985 season.


Hill made the team as a kick returner. He took a return 98 yards for a score in his second season and led the league in returns in his third. He was rarely used as a receiver in his first three years, as the Rams leaned on veterans like Ron Jessie, Preston Dennard, and Bill Waddy.

Yet he did help the Rams reach their first ever Super Bowl as a rookie. After missing the entire 1983 year because of injury, Hill returned with luster.

Though the Rams leaned on Hall of Fame halfback Eric Dickerson and his then-record 2,105 yards off a whopping 379 carries, Hill averaged an amazing 27.9 yards on 14 receptions. Brown averaged over 20 yards and Ellard averaged over 18 yards per catch as well that season.


Despite just 60 receptions in five years, Houston traded two draft picks to acquire Hill to help out Warren Moon, who was signed in 1984. Moon, a future Hall of Fame quarterback, came to the Oilers with new head coach Hugh Campbell and quickly bonded with Hill.

Moon and Campbell won five Grey Cups together with the Edmonton Eskimos of the Canadian Football League. Campbell won nine CFL titles total with the Eskimos.

Campbell was focused on stocking the defense in the draft. He drafted two players, Steve Tasker and Mike Golic, who went on to help other teams.

Hill caught 64 balls his first year as an Oiler, while gaining a career best 1,169 yards. The nine touchdown catches he had had year would be the second best total of his career. Campbell was fired before the season ended, replaced by Jerry Glanville.

Glanville began getting Moon and Hill players on offense by drafting wide receivers Haywood Jeffries, Ernest Givens and Curtis Duncan in the 1987 draft.

Kent Hill had come over from the Rams in 1986 to help Mike Munchak, Bruce Matthews, and Dean Steinkuhler form an excellent offensive line. Munchak and Matthews would later be inducted into the Pro Football Hall of Fame.

The Oilers reached the playoffs in 1987 for the first time since 1980. They would go to the playoffs every year until 1993. Though they lost in the first round for times and reached the second round just thrice, their "Run and Shoot" offense was prolific.

Though Hill weighed 170, he was the inside receiver for Houston. While he often would stretch the seam of defenses, he was tough enough to go over the middle and was a good blocker. He soon became the guy Moon could rely on most.


“Drew was a great receiver, one who knew the offense and was always in the right spot,” Moon said. “I always knew exactly where Drew would be. He had a low-key demeanor. He didn’t get upset. He was always cool under pressure.”

While the 1987 season is most noted for losing four games because of a players strike, Hill was still able to pile up 989 yards on 49 receptions. He then followed that up the next year with perhaps the finest season of his career.

While obtaining his first Pro Bowl nod, Hill set a career high mark of 10 touchdown catches while grabbing 72 passes for 1,141 yards. He got dinged up with injuries the next year, missing four starts, but still was able to gain 938 yards on 66 receptions and eight scores.

The 1990 season was his last Pro Bowl year after Hill caught 74 passes. He followed that up with a career best 90 receptions the next season despite being 35-years old. Hill also has a knack of making his fellow wide receivers better too.

His leadership and influence helped Jeffries, Givens, and Duncan all become Pro Bowl players as well. The quartet caught 315 passes as a group in the 1991 season. Hill and Jeffries had 190 by themselves. He left the Oilers after that year to back to his home state and join the Atlanta Falcons.


Though he was a humble man who shunned the spotlight, Hill had over 1,000 yards receiving in five of his seven years with Houston. His 15.6 yards per catch average shows his ability to get deep into a defense despite working through the heart of the defense most of the time.

While he was old school, just doing his job in a steady fashion that was as reliable as the sun rising and setting, Hill never made waves or wanted superfluous attention. Yet his 634 career receptions for 9,831 yards and 61 touchdowns show he was beyond spectacular.

Former teammates said he lived his last years an avid golfer who ran a business in the Atlanta area. Alonzo Highsmith saw Hill in December, saying Hill told him he was doing well. Yet he had two massive strokes Friday and passed away. News of his passing has slowly been trickling out at a low-key pace since.

Even in passing, Hill has found a way to temporarily avoid the spotlight. Yet now is the time for any fan anywhere, especially those blessed enough to actually get to watch him play, to take a moment of silence and appreciate the gridiron exploits of Drew Hill. 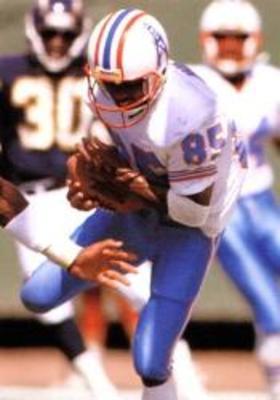