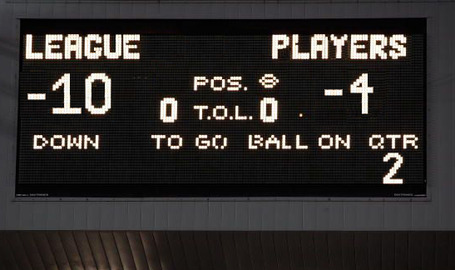 What happened?  Last time we checked, ownership and the league were up -1 to -3.  The players are on a -1 to -9 run.  That's the best defensive stretch I've ever heard of!

Here's the assessment of all scoring in the last four days:

-2, NFL: for having Jerry Jones play charades instead of meaningfully contribute toward a CBA (great infrographic from Will at RamsHerd).

-8, NFLPA/notNFLPA: for Seahawks G Chester Pitts, NFLPA rep, suggesting negotiations couldn't take place when DeMaurice Smith was already on record noting that, in fact, they could.

+6, NFLPA/notNFLPA: for Pitts' semi-retraction.  At least he recognized that he was factually wrong, although he did try to PR his way out.  Two points deducted overall.  For shame, I say!

-3 NFL: for having the Commissioner send a letter directly to NFL players after the players' association dissolved and the league locked them out.  I'm sure the players were just overjoyed to hear from their Commissioner right about now.  Pretty ballsy middle finger thrown there.

-5 NFL: for wanting to enforce the conduct policy while players are locked out.  If the letter was a middle finger, this is two middle fingers, a couple toes and some genitalia tossed under the nose of every player in the league.  Sweaty genitalia.  Here's the quote that has to be the most offensive:

While players won't be able to get the benefit of our evaluation and counseling program during the work stoppage, the personal conduct of players and employees is an integrity-of-the-game issue.

+1 to both sides: for holding conference calls with SB Nation.  The fact that fans are pissed at both sides shouldn't make these overtures any less appreciated.

In essence, the players' representation has played out their hand until legislation starts.  They can't do much at all proactively at this point.  The ownership, on the other hand, can do anything they want (i.e. make tons of mistakes), because they own the teams.

Until these two get into court (which as Van has suggested, and to which I agree, is the only way forward at this point), the players don't have any ground on which to carve out enough footing to impose their leverage.  The owners have the money, the media contracts and the logistics.  It's going to be an uphill battle for the players at this point, but I can certainly understand why they feel it's worth fighting for.

We've got about 40 days left until the NFL Draft starts, halftime according to the scoreboard.  Who do you think will be ahead by then?