Share All sharing options for: Introducing the lockout scoreboard 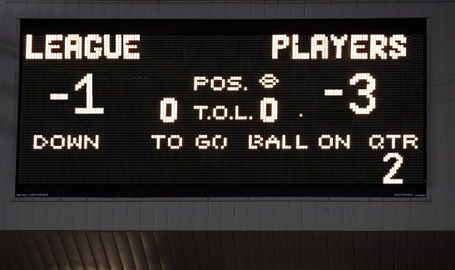 With a firm hat tip to Orson and T-Stabby at EDSBS (bow your head, and don't look directly into the light) and the Fulmer Cup, I present the NFL lockout scoreboard.

The scoreboard operates by Whose Line Is It Anyway rules: there aren't any rules.  So as we get deeper into this, I expect everyone to hate me more than the lockout itself for my tyrannical point system.  Worry not.  Eventually it'll be part of the BCS standings, so all fans get an equal jobbing.

As of this writing, here's the tally:

-1, NFL: for having Jeff Pash on staff.  Pash is a Pashhole.

-3, NLFPA: for draft day broadcast debacling.  Should they get this sorted out into a reasonable PR stunt, I am willing to award them a single point back for not being complete flibbertigibbets.  If not, they're well on their way to double digits.

still pending, NFL: for this:

If [Jerry] Jones's intention was to intimidate the players, he failed.

Ruling on the aforementioned failure should be handed down from the high courts in the next 24 hours.