Sam Bradford and Josh McDaniels have still not met

Share All sharing options for: Sam Bradford and Josh McDaniels have still not met

St. Louis Rams QB Sam Bradford was supposed to meet with his new offensive coordinator Josh McDaniels this week. (He probably got those glasses to read the playbook). According to reports last week, the two were supposed to meet on Tuesday of this week; apparently that didn't happen. Bradford was in Oklahoma last night, being honored at the OU basketball game, where he spoke to The Oklahoman about his frustration with the changes and revealed that he had yet to meet with the new OC.

I just learned that although Bradford and McDaniels haven't met, the coordinator is keeping a close eye on him this offseason... 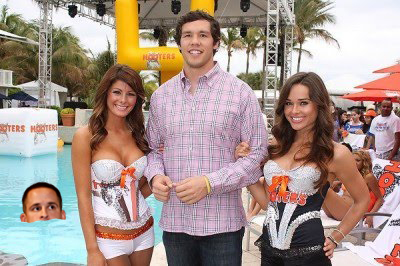 Reading that your franchise quarterback is "frustrated" is never good news.

Part of me's a little bit frustrated. I was really looking forward to spending more time in the West Coast (offense) and really getting into detail this offseason.

Then again, his own youthful enthusiasm won't let him get too flustered. Because another part of him is stoked to be going back to something like the spread he ran at OU.

He then goes on to reveal that he doesn't know when he and McDaniels will meet. Strange. Mike Sando's report filed during the week of the Super Bowl following a conversation with Bradford said that the two were scheduled to meet this week, on Tuesday.

Bradford did go on to reiterate that he plans to get together with his receivers informally if there is a lockout, a possibility that's suddenly very real.

Communication breakdown or misunderstanding? Either way, it's not good. This is not how the Rams need to be portrayed as handling the transition.