...I have run out of anything to say about the St. Louis Rams. We are horrible. The worst team in the league, minus the Colts. The Rams further put a lock on the second overall pick in the 2012 NFL Draft yesterday with their worst performance of the season. Getting shutout as an NFL team is a giant embarrassment, but if it happens at the hands of your biggest rival, the San Francisco 49ers, it's far worse. There is no explanation. Yes, we were playing the backup QB, but that's the same QB who led the Rams offense in a win over the Saints. Yes there are injuries on the O-line, but that is not an excuse to get shutout. The Rams were completely obliterated. Let't take a look at the horrible stats after the jump...if you dare.

All stats from NFL.com

Chris Long has proven he is officially legit. He had 2 sacks Sunday, raising his total to 12 for the season. He has now joined the elite pass rushers in the NFL. Think how many more sacks he would have if he played on a defense that actually played with the lead sometimes. Scary. He's made Papa Long proud for sure.

The Rams held Frank Gore's yardage down as well.Twenty-one carries for 73 yards, but they still gave up 134 rushing yards.

The Rams held the Niners to 0/4 in the Redzone. Making them settle for FGs made it seem like the Rams could be in the game, but then the offense never showed up and the defense got tired. The big plays ruined the day for the Rams defense.

Brandon Lloyd had only one catch. He wasn't even targeted most of the game. It seemed like the Rams just said "Oh, he's double covered. Better not risk it."

The 49ers had over double the total yards the Rams had at 389. Fun.

The Rams only had 31 rushing yards and averaged 1.3 yards per carry and they have an all-pro quality RB on the team. The offensive line is beyond horrible at this point.

There was only one offensive drive that lasted over 5 plays - Un-freaking believable!

The Rams only went into 49er territory twice. Probably a miracle they ever did in all honesty.

Michael Crabtree, who just isn't very good, had 4 catches for 96 yards and a TD. He doesn't have good speed for a WR, but he beat Justin King, who ran the 40 in the 4.2s at the combine, on a fly route for a 52 yard TD. Justin King, I've given up defending you.

At this point, Spags and Billy D are "dead men walking". The Rams will have major changes coming to the team. The best part about this season is there is only 4 games left. All there's left to do is.... 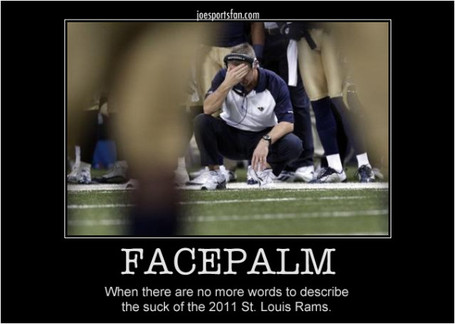