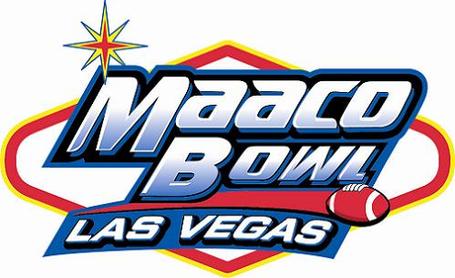 I hate bowl games that don't end with the word "bowl." I can hear the announcer now...

"Welcome to the 2011 Maaco Bowl...(sounding of a F16 jet roaring by as an unusually crimson football whooshes across the screen faster than any football has ever actually traveled) LAS VEGAS!" Cue something by Elvis and loads of B-roll not showing old ladies hogging slot machines and not drinking and not having fun and not caring about the debauchery that makes Las Vegas fun.

Once we get through that crap, we'll have (as evidenced by my watchlist) a battalion of prospects to check out. This is by far the best scouting available to date of any bowl, and a level we won't match until Monday with an Independence Bowl that pits Missouri against North Carolina.

For Arizona St., the headlines will all focus on MLB Vontaze Burfict, a perfect combination of athleticism, power, violence and psychosis. Of course the former pair are his greatest traits while everyone is concerned that the latter two could render him inept at the NFL level. He is a human missile in the middle of a defense who can't control the speed or trajectory. More on Burfict later. Rams fans should take a long look at CB Omar Bolden. His ceiling might be as high as any corner in the draft, but a doubly-torn ACL that kept him out of most of the 2009 season and all of this year pushes him into day 3. If he's clean to go in late February, he could be someone that makes a huge splash at the combine.

On Boise's side, RB Doug Martin is who the Rams should be looking at. He's not incredibly fast, nor is he a powerful back. But he isn't soft by any means and his quicks are something the Rams don't have on the RB depth chart. And my favorite sleeper to shoot up boards next year, DT Ricky Tjong-A-Tjoe, is back on the team after some Dutch dishonesty, a bit of European euthanization, a few prohibited peccadilloes if you will...just NCAA shenanigans, y'all. Nothing to see here.