Share All sharing options for: 2011-12 Bowls: Day one open thread

Bowl season is upon us, and with it some of the most important scouting of the year. Each go round, we see numerous prospects make their mark in their team's bowl game, helping their stock rise through the draft class like sweet droplets of wine slowly cascading down the surface of a glass due to the Marangoni effect. Too much? Yeah, probably.

Today, we start with three somewhat lackluster matchups; however, there's NFL talent in all three. My watchlist for bowl season can help you as you watch along if you're not familiar with, for example, the Louisiana-Lafayette roster. I've already finished the watchlist through Dec. 30. So if you wanna look ahead, go for it. But today's bowls all have their own tab.

Some short previews after the jump.

This year's New Mexico Bowl, also known as the Bill Cosby Van Bibber Bowl, actually offers some useful scouting both in general and for Rams fans. On the Owls, keep an eye on RB Bernard Pierce. He's very agile for his size and has the ability to break away. Wyoming, on the other hand, offers two interesting defensive tackles in Mike Purcell and RS Sophomore Patrick Mertens.

This one's for all the potatoes (credit to Brent Musberger). Ohio's coming off a ridiculously disheartening loss to Northern Illinois in the MAC Championship. Up 20-0 at the half, the Bobcats would go on to allow 23 unanswered points en route to as painful a loss as you can imagine.

Utah St., on the other hand, is practically incapable of avoiding a nail-biter. They've won their last 5 games by an average of 3.8 points. With stud RB Robert Turbin and QB Tyler Tettleton (son of former MLBer Mickey Tettleton) leading the offense, Utah St. is putting together a program worthy of the legend of former Aggie (and Ram) Merlin Olsen. 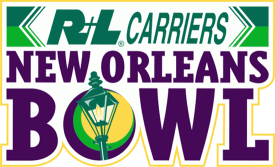 Haven't heard of true sophomore Ronnie Hillman? It's time you did. Hillman's run for more yards than all but two RBs in the FBS, and done it in impressive fashion. He put up 224 on the aforementioned Wyoming team, but in two games against stronger competition in TCU and Boise St., he totaled just 63 yards on 23 carries.

ULL aren't world beaters, but they've got enough talent to compete. TE Ladarius Green hasn't been as impressive as fans of the Ragin Cajuns were hoping, but defenses have closed in on him. I watched ULL twice this season (including their win over my alma mater, North Texas), and in both games, he was absolutely blanketed. Against UNT, he was constantly covered by a pair of defenders; I was surprised he was even able to finish with 2 catches for 31 yards. Of course both of those receptions were touchdowns, and the double teams left other players open helping QB Blaine Gaultier to one of the best games of his season.