Share All sharing options for: Christmas, Geo-caching and the Great White Dog 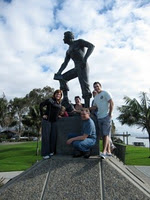 This is a Christmas story. It has NOTHING to do with the St. Louis Rams -Nothing at all... Yet I can't help but think we, the TST community, could use a laugh or two? If you have a humorous Christmas story you'd like to share, put it in a Fanpost or send it to me and I'll make sure it gets posted.
The story you are about to read is "mostly true", and yes, my family IS that crazy...
...For some, it makes no sense to be still. It's like "Being" cannot "be" unless they're moving. Blurred images are the norm, if not the rule... Confused? Don't be, because I’m talking about my family 2010 Christmas holiday.
The rally cry of "Run, Shop, Run!" was common enough. My family is in constant motion when they gather. Everyone, except Calvin.
Watching the turmoil is a favored pass time. I have a running play-by-play going on in my mind. Nieces pulling on one of my frazzled sister’s sleeves wanting this or to explain why this is that…
The morning that gave rise to this story started out with warning signs. I paid no attention, not unlike the townspeople at the base Mount St. Helen’s when geologists came running out their hotel rooms yelling "It’s going to blow!" as they headed for their cars.
There were tremors, rumbles if you will: A trip to Catalina was put off by bad weather, the annual (sort of) golf tournament canceled for the same reason. I could feel tension building among my siblings and their spouses to conjure an event that would rival Minnesota Survivor parties or Photo Recon scavenger hunts. These ended as a favored family game when some of the camouflaged contestants climbed onto the roof of a J.C. Penny’s and the crowd below mistook them as snipers…Oops! Bail should be a part of Christmas, right? How the police looked past the drunken, camouflaged contestants, or how they got there… I think they were dumbfounded by the semi-coherent explanation of what they were doing, or feared the paperwork involved in booking twenty adults and children, let alone ordering psych-evaluations... 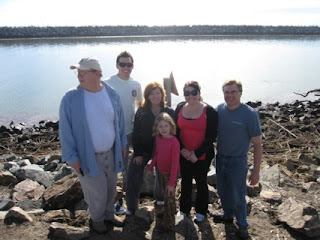 But we must try to top past events, right? Like the first shot of any war, no one knew who to blame. The first shot heard round my family world that day was "Geo-Caching". It came from within the crowd of twenty plus gathered in my mom’s kitchen in Laguna Beach, CA. All heads turned, looking for the source, but no one laid claim. All I know is the heads of the assembled started to slowly nod, first one, then another. I marked the silence as the idea was considered. Then murmurs followed as members of the group each started reaching for Iphones, IPads, and any laptop handy to search for the reasons why "Geo-Caching" was a great idea.

I have to hand it to my family. The whole glass is half full thing comes to mind when an idea is sparked. Negatives are for the timid when the chance for a family adventure lurks just out of reach. We reach. Really, really reach. If that doesn’t work, we modify, modify. Then we expand and expand till the event becomes something Webster’s will offer as a definition of overkill and shows a picture of my family as an example, with everyone grinning, bleeding or grimacing in a way that looks like they’re grinning.

Five minutes after "Geo-Caching" became the accepted course for the day, a small working group formed. They crowded around a computer for a few moments. The whir of a printer could be heard and pages of "The Christmas 2010 Amazing Race" came spewing forth. After a make-shift editorial team made fine adjustments (Now one half-hour into the creative process), this is what became the plan for the day:

Rules:
Four Teams.
By draw of cards, the order of cache hunt will be determined.
Teams begin at Monarch Bay and proceed to Dana point Harbor to begin their quests.
Teams will be required to accomplish tasks along the way:
A Team picture is required with each cache as well as the following:
1\ With a firetruck
2\ R.H. Dana Statue
3\ Salvation Army Ringer guy (this description was by committee)
4\ Bowling alley
5\ Driving range (golf)
After the four Caches have been found in Dana Point Harbor, The Teams will proceed to a driving range. There they will purchase a bucket of balls and sequentially hit the balls.
The Teams will then proceed to Saddleback Bowling lanes, where each person will bowl one game, for a combined team score. The highest score will determine the headstart o the lead team for the final push for the Championship.
Lunch Break (Bowling alley food… anything to increase the chances of not crossing the finish line?)
Teams will proceed to the Mission Viejo Mall and collect the following treasures:
1\ cologne sample
2\ paper toilet seat cover (unused)
3\ Corndog stick
4\ Picture of team with Santa
5\ free cosmetic sample
Get pictures printed and return to Monarch Bay for final Cache clue. Go find the Cache.
Take picture of last cache log book and head to Mom’s house. First one to complete all task and arrive at Mom’s wins!

All this in thirty minutes, with no real thought other than: Why Not? I guess I should back up a bit and explain "Geo-caching". The first documented placement of a GPS-located cache took place on May 3, 2000, by Dave Ulmer of Beavercreek, Oregon. Boxes, sometimes old ammo containers or buckets, are hidden in different locations around the world... That's right, I said World! In this country, there are over a million Geo-caches hidden under everything from bushes to buoys (Yes, some you get to swim to find.) Using the Global Positioning System (GPS), and clues provided online, you track down a box full of nick-knacks.

When you find a cache, you take something from the box, sign the small guest list, and add something to the box before re-hiding it for the next hunter to find. No, I'm not joking. This thing is HUGE folks. Go online and see for yourself. With the exception of Calvin, we all piled into rented Mini-Vans (Morrisons always pay for extra insurance when we rent a cars) and sped off to Dana Point Harbor. It had been raining for days, and I'm sure Budget Rent-a-Car and Dodge will be happy to know that a foot of mud on the road doesn't stop one of their vehicles. Curbs and parking space blocks don't stop them either...

The vans fanned out to different parts of the harbor. Parking in strategically planned places to enable not only return to the vehicle after finding a cache, but hiding the vans from the harbor police. A lady crossing the road, at the far end of the harbor by the yacht club might have called them when she had to dive into a giant Aloe plant to avoid possessed Mini-vans speeding toward her... On the sidewalk.

I was in a group that had a tough time finding caches. We searched in the bushes outside a restaurant, until the smell of food drew a few of us away from the hunt. We asked for a table by the window so we could point my sister Trish's kids to areas that looked promising. Being a loving uncle, I threw chunks of bread to my nieces when they emerged from a clump of seaweed. It bought me time too. Seagulls grabbed the bread in mid-air and the nieces took off after them like the birds owed them money.

The harbor hunt was cut short when one of the other group's members came in to say someone had dropped a rock on my mom's foot. The rock was being coached out of it's resting place by the dulcet tones of my mom. People like my mom are why we have things like the Pyramids. In fact a couple that could have been from Egypt heard her, mumbled something about Rah, and fled in the opposite direction. Anyway, at one point, one of her slaves grandkids let the rock fall on her foot as they levered it up.

So we all piled into the Mini-vans, and headed for South Coast hospital. On the way there, someone decided it was a good idea to check and see if there were any "Geo-caches" near the hospital. Instant messages flew between speeding mini-vans. More caches had been found literally withing a 1/4 mile of the hospital emergency room door. As the van I was riding drove slowly by the emergency room door, another van screeched to a stop long enough for my mom to stumble out the side door. She stood there for a few seconds, yelled at the van containing her teammates as it sped away, then limped toward the hospital door, swatting away the offered help of a nurse. I later learned she told the doctor to patch her up and call her a cab. It seems the entire time she was having her foot bandaged, she was using her I-Phone to find a Geo-cache...

Some teams headed for the driving range, some to the bowling alley. The more daring headed for the Mall and a Santa photo. There was an incident at a firehouse, but facts are sketchy. It had something to do with a nephew releasing a parking brake and putting a fire truck in neutral while the rest of his team posed for a photo with the friendly firemen. My team headed for the bowling alley late in the day in time to see my mom limping toward the pins and heaving a bowling ball two feet in front of her, then kicking it with her good foot. Tired, and wishing I'd never heard the term "Geo-caching" we all headed toward home.

The Mini-vans all arrived at about the same time. The huge crowd of family surged through the double front doors, then into the front room. Calvin sat quietly by the fire and looked up at the returning mob. My family went quiet at the look on Calvin's face.

We all knew what he was thinking - "People are such idiots"

﻿
﻿
May your Christmas Holidays be the best ever, and the coming New Year filled with joy due to great Rams Draft picks! - The Turf Show Times Crew