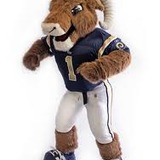 Best Sports Stadium in the World: I haven't been to any, so I can't decide on one

In His Own Words:  I was born and raised here in Wisconsin and am close to the Minnesota border. One of the biggest reasons I decided to be a Rams fan was to break away from the crowd. That and at the time I started being a fan the Rams had all the players. Holt, Bruce, Faulk, Warner the list goes on. A high powered offense that was extremely entertaining to watch. Then the team fell on hard times but I stuck with them. I could have jumped on any other bandwagon but I decided to stick with them. It looks like things are starting to change and I'm looking forward to it. Of course I said that last year and things haven't been to great this year but it's coming very soon.