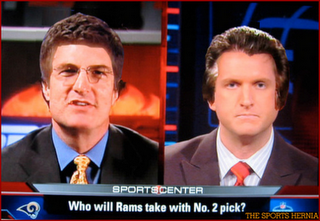 You may think things are bad now, but soon we'll have "The Hair" to deal with too! Welcome to yet another Monday Night Football Thread and Photo Caption Contest. Tell me what Mel Kiper is thinking? Let your imaginations run wild. Kiper is some of the best Draft cannon fodder I know, so let's see what you come up with?

Remember the one rule here: Negative isn't allowed. Any thoughts on the Rams current... Well you get the idea? Comments on the last Rams game can be posted elsewhere in the great articles here at TST.

The prize for tonight? Hmmm? How about a Retro Rams (or other team if you're a visitor) watch? 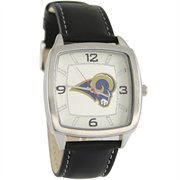 *** Enter as often as you wish! ALL entries must have "Caption Entry" in the subject line, and the caption written in the comment box. No exceptions. Fail to follow this simple guideline, and your caption is disqualified.

*** P.S. - Stick around after the game and join in the mildly debauched fun the Monday Night caption Contest has become famous for of late! See you in the thread!