The St. Louis Rams 2011 season win total doubled yesterday! I've heard a few calls of "lucky" and "ugly" from the media regarding the Rams win? If you'll allow me to, I'd like to offer this as the official Turf Show Times response to such claims: "NEE-NER! NEE-NER!"

I like this response because it's not only an eloquent rejoinder to the media, but takes a swack at the San Francisco 49ers too! I'll take verbal duality every time...

Remember the rules of the Monday Night Caption Contest: ...er, uh? Well outside of limiting vulgarity and negativity, there really aren't any rules? If you get out of line, we have a new way of telling you.

The prize this week? How about a St. Louis Rams Hooded Fleece Pullover (or other NFL team if you're a visitor)?

Enter as many times as you wish! Ready, Set... Go!

VTramsFan EDIT: IF YOUR POST IS A CONTEST ENTRY< PLEASE START IT WITH: "CONTEST ENTRY: Makes it easier to judge thanks!!

We have a winner from last week's Photo Caption Contest to announce. The judge for the contest, our very own VTRamsFan, spent hours pouring through the over 350 comments and entries. He's now in therapy, but not before sending me his winners and runners-up. Here's a reminder of the photo they captioned and our winners... 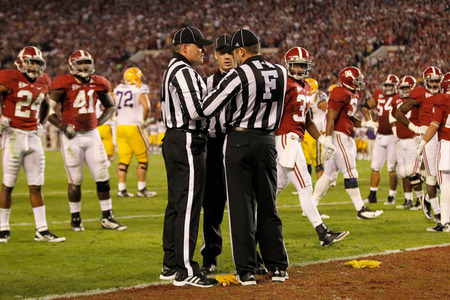 Sergey606 - "Hey guys, why are we even on the field? We're wrong half the time, and they have replay!"

Yes, don’t you think these vertical stripes are slimming?

Ref: "Ok, remind me again ... the guy in the middle with the ball needs to give it to the quarterback

BEFORE or AFTER the other guys move?"

Send me an e-mail Midasknight, and I'll get your copy of "The Football Outsiders Almanac" to you straight away.