I know most of you guys don't understand why I love the Red River Rivalry/Shootout. Sure, I'm making some assumptions here, but without asking each of you individually, I kind of have to rely on assumptions, no?

Maybe it's as foreign as Ohio St.-Michigan, as indistinguishable as Army-Navy, as arcane as the great SEC rivalries, like the Iron Bowl, the World's Largest Outdoor Cocktail Party, and Clean, Old-Fashioned Hate. But growing up, the RRS was a weird sports event for Dallas.

For a city with professional sports teams in every league that consistently attracted the national eye, after the Pony Express era at SMU, Dallas never pulled much college attention.  Sure, we had the Cotton Bowl (the site of the RRS), but it's not in the BCS mix.  So it's not so much about Dallas as an epicenter for college football.  It's about Dallas as an epicenter of Texas.

People argue Austin is the true Texan city.  The capital, a central location, the home of UT, it's got a lot on its side.  Some used to argue Houston, but all they've done in the last 30 years is build huge corporations and develop phenomenal Texas rappers. San Antonio? Tourist town. Fort Worth? That's cute.

But Dallas is different. There's a reason why they had a show abo0ut the city and the name alone was sufficient. Dallas felt like a weird bridge between the past and the future, between what should be and what can be. Cheesy? Sure. But it's just not a normal place.

It's not overly Texan without being American and it's not overly international without being Texan.  The best example of the latter is the Texas State Fair, a strange combination of automotive innovation, fried food innovation and football. And while I like a good truck and I'm always down to eat, it was the football that always interested me most. That and Big Tex (who finds a way to be entirely creepy and entirely awesome).

A simple anecdote to wrap this up. I went to the University of North Texas, a wonderful, adventurous land of educational and personal experience, about 40 minutes north of Dallas proper. I could get to my parents' house in about 35 if the highways stayed true to the Texas transportation system: wide open and fast. But on the Friday of RRS weekend, it would take me about 3 hours to take I-35 south, as the four southbound lanes were packed with crimson and cream vehicles of every size and shape (I mean that. I once saw a bus decorated as an upside down crimson and cream Bevo). In those three hours, women would bare themselves to me for no reason, people would provide a fresh layer of vomit for the highway, and pretty much everyone would have a bomb ass time on the way to the city. It was an experience that is surreal, illegal and wonderful all at once.

The game itself isn't always awesome. And yes, some people use it an excuse to do stupid stuff. But for one weekend, for this weekend, my hometown (if you can call Dallas a hometown) exhibits the perfection of college football.  The (prepare for cliche) pomp and circumstance of an event overflowing with tradition, revelry and acknowledged faux superiority. 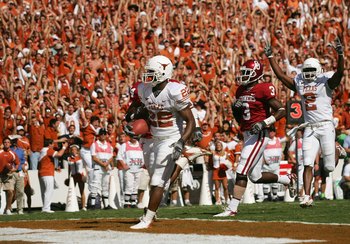 In short: I fucking love Dallas, and I love this game. Have a good morning, and drop your college football observations here as you follow along with this week's watchlist. Here's the MTD game notes too.