Sure, many TSTers will be watching a game of another sport this evening, but I can't forget about my fellow draftniks who could care less about baseball! I know where y'all are coming from.

That being the case, the college week has been underway since Tuesday, as four games have already been played this week. Well, I shant let a fifth pass.

Here's the watchlist for this week, which you'll see opens with tonight's BYU-TCU contest.

Is it the most exciting game? No. But you don't need great teams with huge names to get some solid prospecting in. Case in point: BYU OT Matt Reynolds. He's a big body that can power through ends in tight space, but moves very poorly despite having a ton of experience on the left side. Does he look like a surefire NFL Pro Bowler? Of course not. But given how many millions the Rams have invested in Jason Smith, I wouldn't be surprised to see the Rams spend a mid-round pick on a RT with some upside - Reynolds fits that bill. 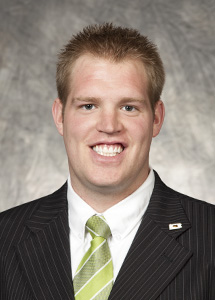 Forget the NFL; just be the spokesman for BYU. My goodness, that's a politician's cheese in the making.

And what about TCU? They've got plenty of prospects in the pipeline. QB Casey Pachall has taken over with Andy Dalton's matriculation and has looked very competent. While Pachall suggests the future is bright in Funky Town, he'll have to move on without senior OLB Tank Carder.

Tank's a slower, less athletic LB who plays with more power than his frame suggests and tackles incredibly well. Coming out of the 4-2-5, he could play multiple positions in either the 3-4 or the 4-3, so he could be an interesting day 3 choice for the Rams as well.

So if you're not into ye olde stickball, check it out and drop your observations here.