Oh Joy. As a fan, it's tough to be in this position. While the current coaching staff certainly isn't getting it done, a complete overhaul with a young team can spell disaster if things aren't handled properly. Unfortunately for us fans, there is a very real chance that the Rams could hit the reboot button after the end of the season. So who exactly would Stan Kroenke take a look at? Hitting the jump will take you to a list of candidates that could very well end up being the next Rams head coach. 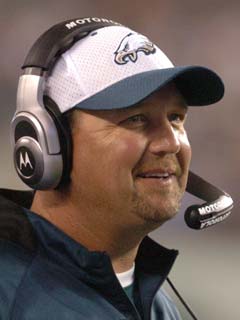 Even though the Eagles are struggling, Mornhinweg is a hot commodity. Many people, including Michael Vick, attribute Mornhinweg with Vick's career resurgence. He's also helped field a good offense with young wideout stars Jeremy Maclin and DeSean Jackson.

While Mornhinweg did a bad job with the Lions, there isn't any reason to suspect he can't turn the Rams around. He's been under Andy Reid long enough to pick up a few things, and his work with the Eagles offense can't be overlooked.

Schottenheimer is another candidate for a head coaching position. Like Mornhinweg, he is a well known commodity in the NFL (for better or worse). He actually started coaching as an assistant with the Rams in 1997. He was previously a QB coach for the Chargers, helping develop Drew Brees and Phillip Rivers.

Schottenheimer may be on his way out with the Jets, which makes him available. However, I'm not sure if he is ready for the coordinator to head coach change. However, he does have experience working with his father and also Rex Ryan (while an egomaniac) who are both good coaches.

Grimm is another coach whose name has been thrown around with vacant head coaching positions. He is well respected in the league and did an excellent job creating a superb offensive line in Pittsburgh. He also did a good job with the Cardinals line when he came over with Ken Whisenhunt, but the line hasn't done as well in recent years.

I believe Grimm is a good candidate for a head coaching position. He has experience, and did a great job in Pittsburgh with the offensive line. With the type of talent the Rams have on the O-Line, he might be the one who can finally tap it and allow the unit to play up to their potential. Personally, I think he would be a good fit for the Rams.

Toub is widely considered one of the best, if not the best, special teams coordinators in the league. His units have consistently been ranked as some of the tops in the league (for example, in 2006, three special teams players were invited to the Pro Bowl). He is incredibly popular and some have even questioned if he would take over for Lovie Smith should the Bears can him.

Toub is a well liked coach who many believe would be successful if he was given his own team. His units have consistently been one of the best in the league, and there is no question that he loves what he does. However, his special teams background may sway some football purists away from him.

That's all I have time for, but the list could be endless. Coaches like Gregg Williams, Perry Fewell and Todd Bowles have been tossed around, and I'm sure some coordinators of up and coming teams will be looked at as well by teams with open head coaching positions.

This could all be a wash if Spagnuolo stays, but it's fun. Besides, I'm sure all of the people I've listed could say "great effort, no execution" after a game too.