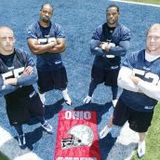 Best Sports Stadium in the world: the Colosseum

In his own words:

Hello fellow Rams fans! I go by RamBuck on TST, but my name is Brent and I’m a 29 year old engineer originally from Alabama.  I moved to Missouri in 2005 after graduating from Ohio State, and became a Ramsfan around 2006 as I got into local sports.  I grew up a Saints/Cowboys/Falcons fan as there weren’t many pro football teams in my immediate region, but now I am completely committed to supporting the Rams and am excited about the future of our franchise.  If you want to know more, hit me up on Twitter: @lannyosu.  Thanks, and Go Rams!