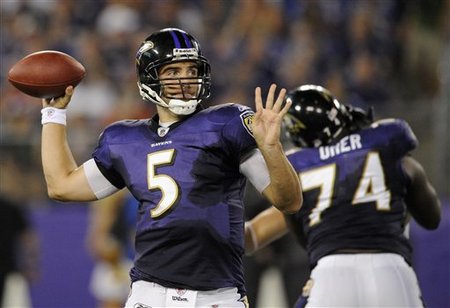 Hey, Rams Nation!  Tonight, we’re heading into the last game of the preseason and I’m proud to say that this past month has been a good one for us.  Sure, we lost the first preseason game, but then we took the next two. And now that we have the Baltimore Ravens coming in, we’re just going to continue playing hard so we can hopefully finish training camp with a victory that will give us that positive momentum we want to have as we enter the regular season.

Beating the Ravens isn’t going to be easy.  They have a good, young quarterback (Joe Flacco (Troy Smith is supposed to get the most game-time (Thanks, @ScottieB_23))) and running back (Ray Rice), and - well - their defense speaks for itself.  Ray Lewis, a future Hall of Famer, has been doing his thing out there for a long time, so you know he’s going bring the heat.  And then there’s the rest of the team’s defense which is also full of great players.  They’re definitely gonna give us a huge task to tackle, but it’s a task that we’re looking forward to taking on.  We just gotta go out there, play hard, and continue pulling off the successful approaches to the game our coaches have instilled in us. ...If we do all that, we should win.

We’re all looking forward to seeing everyone out for the final preseason game.  It’s gonna be a fun one!