I have spent the last two weeks writing hundreds and hundreds of Al Davis jokes.  I had them compiled in a little journal I would bring with me to bed.  Every night as I would read over them, I would say, "Tee hee.  That Al Davis sure is old.  And scary looking.  And that's funny!"  I would fall asleep filled with joy.

This morning, I was visited by the Association for Zombie Acceptance, who are apparently a very powerful legal consortium protecting zombie-like people from defamation.  I just wanted to tell everyone ZombiePeople are people too.  Just because Al Davis' DNA is now 94% Jangshi and just 5% human (the other 1% is unidentifiable with any living creature, though it does bear resemblance to platypus DNA), he still deserves basic zombie rights: 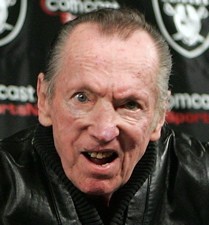 Sure, he may not use a napkin to wipe off the bits of brain that didn't make it into his zombie digestive system: 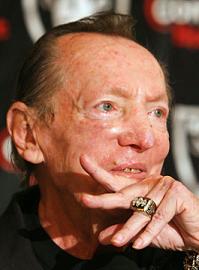 But damnit, Al Davis and all undead NFL owners deserve our respect. 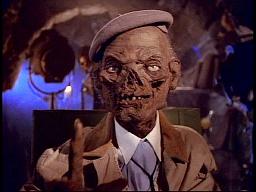 For game-related info, check out the SBN page for the game.  For Raiders news leading up the game, check out Silver and Black Pride.

NOTE: I added some basic stats this time.  Starting either next week or in the week 4 preview, I'll add some advanced stats to that section.

As excited for Sam Bradford?  Yeah, the luster has worn off a bit on me too.  But that was inevitable.  What wasn't was his performance.  It was strong, though not enough.  We've seen every reaction from the "a moral victory in week 1 with a rookie QB is nearly as good as an actual one" to Aaron Hooks' rant at SBN St. Louis (worth a read).  But that's behind us.  This is about the passing game in Oakland.  And honestly, who knows what we'll get?

Bradford and Mark Clayton had instant on-field chemistry (sounds like the start of a bromance pic), but we saw that last season in Brandon Gibson's first game as well.  For those two, this week is about sustainability...and better hands.  Amendola is still on track, being very Amendola-y, scampering like a meth'd up squirrel for 67 yards.  Great guy, great story, on on the cusp of being a great producer for Sam Bradford.  Not the Max Bialystock kind, but the short slant and slash the field up type.  If Laurent Robinson can get more involved, Bradford could have a useful trio for his rookie season.  Certainly not world-beaters, but good enough for a first season of learning, burning and yearning.  Now were we to add a guy from the Chargers or maybe call out a WR's name on day one of the 2011 Draft...

As for the Raiders, it's certainly not a threatening secondary outside of Nnamdi Asomugha.  He's a legitimate shutdown corner.  It will be interesting to see how often Bradford challenges him, and if Asomugha handles it, how long Bradford will wait before going back his way.  I wouldn't be surprised to see Asomugha on Clayton this week; if that's the case, expect Clayton's numbers to drop significantly.  But outside of Asomugha, this is an attackable unit.  After all, Vince Young only threw four incompletions last week; it's a secondary with serious holes.  Michael Huff is a liability in deep coverage, Stanford Routt gets targeted constantly (largely because opposing quarterbacks don't want to challenge Asomugha), and it's a revenge game for CB Chris Johnson, who Rams fans might remember as the windfall from the Robert Thomas trade with Green Bay.  Ouch.  If there's one guy to go after here, my vote is Johnson.  He's strong, and plays the press and zones relatively well, but in bump & run or man, he's liable.  He'd make a very interesting matchup partner with Laurent Robinson.

I'm going to make this short: the offensive line needs to block better in the run game.  That is all.

For Oakland, their stats are skewed pretty heavily after playing Chris "Every Coaches' Dream" Johnson last Sunday.  Still, it isn't out of the question to think Action Jackson could see a big day against the Raiders.  Oakland brought in some badly needed talent to the LB corps in drafting Alabama MLB Rolando McClain 8th overall.  Kamerion Wimbley is now a Raider after four seasons with the Browns.  After notching 11.0 sacks in his rookie year, Wimbley was never able to get near that total again, though he was productive.  However, the move was not just from one AFC team to another, but from a 3-4 OLB position to the 4-3.  He played well enough last weekend, finishing with a sack and forcing a fumble, so after a week, the transition hasn't been all Bobby Carpenter-esque.  Oakland rotates through their SLBs, but I would think Jackson would be eager to run at Trevor Scott

Bearing in mind that Vince Young only attempt 17 passes, it makes Oakland's two sacks that much more impressive.  And considering Sam Bradford threw 55 times last weekend, just allowing two sacks isn't a shabby job for the O-line.  In all, I thought the Rams pass blocked relatively well.  Bradford was getting rid of the ball pretty quickly, so I don't know if we saw him take advantage of his protection as much as he could.  After all, one of those sacks came from Adrian Wilson and it was on blown assignment, not a lack of ability from one of the linemen (has anybody heard anything about Alex Barron this year?).  I don't think I'm alone in thinking the Rams' line should hold off the Raiders here.

Part of that is because the Raiders have a lot of power up front, but not much speed.  And I swear if you bring up John Shaughnessy...  No, the Raiders' front line isn't the Colts' quick fire attack, but it doesn't have to be.  The problem is that when you put together a power defensive line and play a running game that's built on speed and built well on it (Titans, sir.), the odds are already against you.  Back to this game - to me it comes down to better run blocking from the tackles and especially the guards on pulls.  I expect our guards to swing out at least a couple of times in each half to take advantage of the pace of Oakland's defensive front.

This is the most interesting matchup IMO.  The Jason Campbell era in Oakland wasn't incredibly aggressive, but then again, he's still Jason Campbell.  It was a similar line to what Bradford had, albeit without 3 INTs and much less passing attempts.  There has to be serious questions about the Raiders' WRs - last week's best WR performance came from Louis Murphy, who finished with four catches for 28 yards.  Whipping boy Darrius Heyward-Bey finished with a lone reception for 11 yards.  While the overall passing peformance is colored by the strength of the Tennessee secondary, were the Rams to limit the Raiders to a similar degree this week, the optimism of Raider fans from the preseason is going to turn to mid-week hostility very quickly.

Speaking of the Rams, it was a pretty solid effort against a Cardinals passing attack that is very hard to stop.  How many games this season will Larry Fitzgerald be limited to just 3 catches for less than 50 yards in?  It was a great opening performance by Ron Bartell who has set the bar pretty high for his 2010 season.  Bradley Fletcher looked strong, and added a long fumble recovery to his credit, but he was slow in zone pickups.  Between BFB, Kevin Dockery and the LBs, Steve Breaston found plenty of space.  We've gone over the ridiculous game Breaston had and not just as a WR.  It's worth noting that Louis Murphy occupies a similar role in the Raiders' offense, so it's going to be an important building block for the Rams to limit Murphy one week after Breaston sliced them up for seven receptions and 132 receiving yards.

This is probably the area that worries me the most.  Oakland has solid depth at RB, with Darren McFadden, Michael Bush and Michael Bennett at the back.  And given what we saw last week against Arizona, especially on their TD drive in the first half, I'm not terribly confident that the Rams' D-line can stop the run.  So I'll keep this section short, but one more thing - more Laurinaitis please.

Oakland's offensive line was pretty porous last weekend.  With rookie project Jared Veldheer at center and Robert Gallery (I'm not saying it...) questionable, it's certainly an opportunity for the Rams to attack the interior.  I'm not incredibly worried about the pass rush.  With the blitzing schemes we saw from Flajole last week, the Rams are capable of putting pressure on quarterbacks.  The issue for me is the running game.

While Oakland's interior line isn't nearly as strong as the Cardinals' middle three, last week's performance against the run was poor.  It made things that much harder on the linebackers, and it showed in the box score.  It's going to be important to win this battle early if the Rams don't want to be involved in another nail-biter.  If the Raiders' line holds up, they're going to be in the game.  Greater things have happened.  Worse too, I suppose.

This week's top 3 storylines brought to you by Ines Sainz of Mexico's TV Azteca, the very ordinary, absolutely normal, completely regular reporter who, uh, was welcomed by the Jets earlier this week: 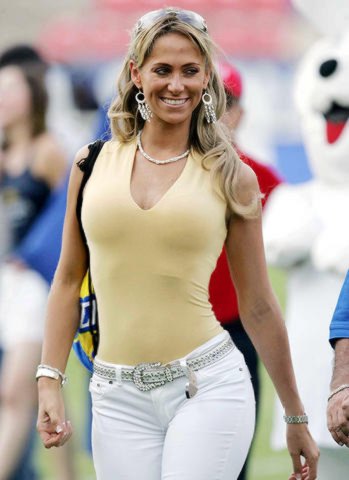 This game is not a game in which we can come out, uh, flat.  It's our first away game, and it's against another team whose trying to get back to respectability, another team for whom that quest was set back by a demoralizing loss.  It's a winnable game, but it won't be if the first pair of drives are two huge mountains to climb. 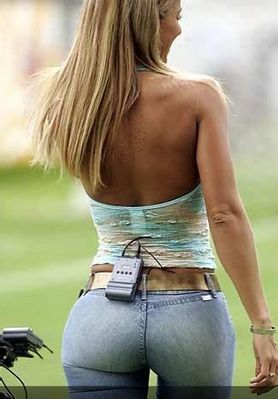 To me, this game is going to be won or lost in the thickness in the middle.  We've got to make sure the gameplan fits, and fits perfectly. There can be no gaps, and it can't be loose.  It has to support everything else and do so while being both obvious and subtle. 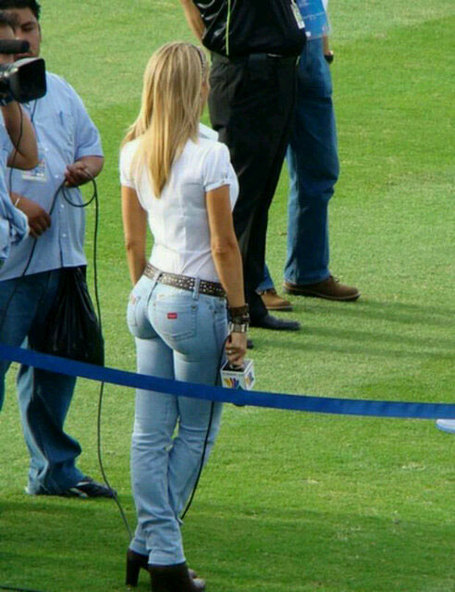 Classy, yet dirty.  Respectable on the outside, but disgustingly driven, willingly to do whatever it takes to be successful.

I know this has been an absolutely shameless conclusion, so let me say this.  Ines Sainz is a joke.  Everybody knows this.  The NFL knows this.  And she not only knows it, she promotes it.  And that's what's truly shameless.  She acts like a sports reporter while doing everything she can to get her ass on camera.  I don't blame her.  She's trying to make some cash.  Good for her.  Except don't talk.  And don't act like you deserve respect.  And just show up naked.  I'd take you more seriously.