Going back through this drive, the Rams were perilously close to starting the 2010 season on the wrongest foot of all possible feet.  The Arizona offense looked like what I hoped the Rams offense would on their first drive: a healthy mix of power runs and short passing, moving the ball downfield, installing different looks early to keep the defense off.  Atogwe's strip of Hightower would render the drive moot, but it was a productive effort up until that point - four runs and four passes for 56 yards.  And those four passes went to four different receivers.  Also of note, the Cardinals ran half of their plays out of the shotgun, three of which were passes.  A solid blend from Arizona.

Defensively, it was pretty basic.  A couple blitzes using five men, but nothing like what we would throw out later.  Chris Long did slide over to LDE, though he definitely got off to a slow start.  In fact, the Cardinals' O-line had a good first drive.  Anderson didn't need much time, as he was going for mostly shorter to intermediate routes anyway, but his protection was solid.  And credit Atogwe with a great strip (video).  He came up on a safety blitz, came around the far end of the play to get behind Hightower and punch the ball out with his right hand.  I should mention something about his contract here, but, uh, well I just did.

The rest of the first half after the jump.

We hate on Shurmur plenty, so let's give him credit.  The calls on the first drive were pretty damn good.  The playaction on the first play worked to perfection, and Jackson got his first carry on the second play.  Jackson cut back when he probably should have gone outside on that run.  After that three yard pickup, the Rams ran another playaction and Bradford essentially threw it away.  Darryl Washington came through the middle, and Bradford only had time to check down before looking back upfield.  On third down, Sam underthrew Laurent Robinson, and I don't know if there was enough room anyway.  If there was a playcall to question, it was this one.  But all that was irrelevant as the blocking on the field goal was, well, invisible, and the entire left side of the St. Louis line collapsed and what should have been an easy three points was a momentum changing block (video).

On the first play, the Rams brought a full linebacker blitz, sending the entire front seven.  It worked.  Robbins was allowed to come through, and he didn't hesitate, taking Derek Anderson down for an easy sack (video).  After a dump off to LaRod Stephens-Howling set up a 3rd and 9, Derek Anderson underthrew an open Stephen Williams with the Rams in a Cover 2 Zone.  The play wouldn't be the last bad throw by Anderson.  It should also be noted the referees were pretty poor in the first half, and this was a blatant example.  Chris Long had his helmet surgically removed by RT Brandon Keith: 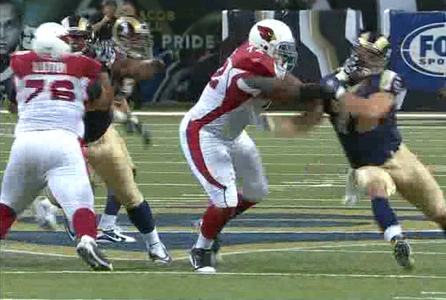 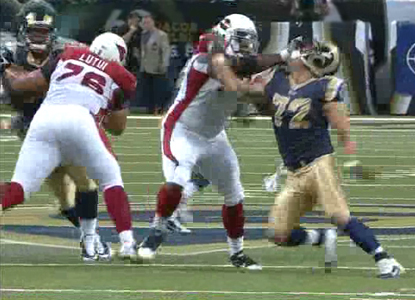 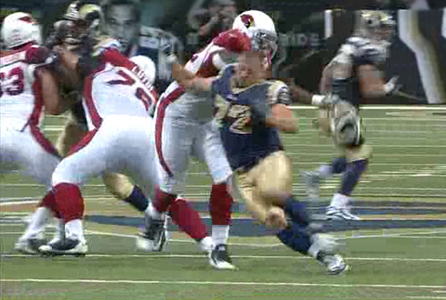 On first down, Sam went underneath to Mike Karney, and looking at the tape, the protection was good enough that he could have waited for something else to develop.  It was out of a 2WR package, so it wasn't the most aggressive play call, but we were at our own 11, so the thinking was likely that with that field position and Sam under center, the Cardinals would work in a run blitz.  They didn't, and the play was forgettable.  Fast forward to a 3rd & 3.  Bradford hits Hoomanawanui who was lined up out wide and ran a crisp route out of a four wideout set.  Unfortunately, he would limp off the field and we know now it was an ankle sprain.  The referees called offsides on LB Clark Haggans, but it looks more like he just got a good jump.  Weird call, but it was declined anyway.  On to the play of the drive, unfortunately, was Bradford's first career INT.

Out of a tight 2TE set, Bradford runs a playaction under center, and it works pretty well, drawing most of the defense to the run.  As he curls around to set his feet, he's looking downfield at Mark Clayton.  The throw doesn't lead Clayton enough, and Adrian Wilson makes a great play on the ball.  An honest "welcome to the NFL" interception (video).

With such great field position, it's hard to believe the Cardinals didn't get any points out of this drive.  On first down, the linebackers filled the gaps perfectly, and James Hall made the tackle for a loss of one; it's the kind of play where Hall gets a stat, but the linebackers get nothing to reflect their execution.  On second, Arizona spread 5 wideouts, and the Rams lined up in the nickel.  A quick WR screen didn't get much of anything as the Rams' pursuit was nearly flawless.  On third down, the Rams brought a heavy blitz, though it was picked up very well.  Anderson tried to just float one up to Larry Fitz, but Bartell's coverage was perfect.  Great series for the Rams' D.

A nice run on first down by AxJax was negated by a sack on 2nd down.  C Jason Brown doesn't set his block on Calais Campbell, and he slides through (despite the second effort by Brown) for the sack though Bradford did get a good look at his first receiver (video).  On third down, Bradford hit Clayton on a comeback, but he slipped as he turned, so he maybe picked a lone yard after the catch.  Either way, it wasn't enough and the Rams had to punt.

The Rams forced a tough third down, but Anderson hit Early Doucet in stride despite some tight coverage for the first down.  After a great Laurinaitis tackle on first and an overthrow intended for Fitzgerald by Anderson on second, the Rams faced a third and 6 from the 40.  They would stop the play, but not without a defensive holding call on Kevin Dockery that would give the Cards an automatic first.  It was as soft a penalty as you could call without being fired by the league on Monday.  Not the best quarter for Al Riveron and his crew.  Derek Anderson would end the quarter on a high note completing a pass to Early Doucet, but the Rams would kill off the drive on the next series, forcing the Cardinals to kick a field goal.

I'll try to get the other three quarters out today.