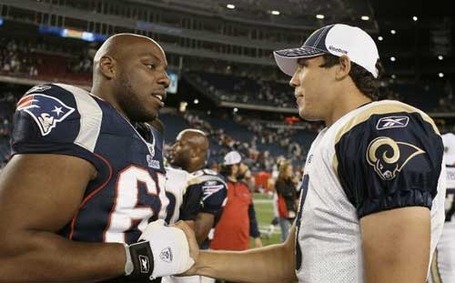 Hey! What’s goin’ on Rams Nation? I just wanna chime in on that good win we had last Thursday against the New England Patriots. I know it’s kinda old news now, but I still wanna throw a few feelings out there.

We had a nice performance by our star quarterback, Sam Bradford. He came out and completed 15 of 22 passes for 189 yards and 2 touchdowns, which was great. It was his first start, so it’s good to see him come out and perform as well as he did. There was a lot of talk going into the game about how he would fare, but - naaaaw - I think he stepped up to all challenges and showed why the Rams drafted him as the first overall pick.

Other big highlights came from Michael Hoomanawanui, the rookie tight end from Illinois. He had 4 receptions for 53 yards and 2 touchdowns. And that one-handed catch he made was just incredible. I really think he opened a lot of eyes with his performance.

The defense came out and prevented Tom Brady from being Tom Brady. I think the Patriots had, like, four three and outs in the first half! And that’s no easy feat considering how the Patriots have such a top notch offense that’s been ranked in the top five for the past so-many-years.

As a team, we’re all excited about the win. I know it’s only preseason, but to beat a team who’s performed so well in the past and won two Super Bowls really serves as a big confidence booster. Now it’s important that we just continue doing what we’re doing: continue trying to get better as a team, as well as an organization.

This Thursday we have to take all this confidence and keep our momentum going against the Baltimore Ravens, because we still have a lot of improving to do. And the Ravens are a good team! They have a good quarterback, good running back, etc. They did good things last year, so I’m certain this game will give us another fun challenge to conquer, and we’re ready for that opportunity.

Between now and then, we’re just going to continue doing the things we’ve been doing: working hard every day in practice so we can keep getting better. We’re going to take things one day at a time / one play at a time and become a stronger team from week to week.

Myself, along with everyone else on the team, hopes to see all of you at our last preseason home game. Thanks for all your support and we’ll see you Thursday!