Ah, the joys of football.  The sky is falling.  Sam Bradford is practically already injured.  Our O-line is horrendous.  We can't stop a single pass.  We are doomed to another 1-win season or even the magical 0-16 line.  Isn't it great?

As always, the first taste of football means ridiculous overexaggerations and overreactions.  We're all guilty of it, whether it's buying into George Selvie or selling on Jason Smith and Rodger Saffold.  That's not to say Selvie will be out of the league in a year and the the SmithSaffold train is headed to Canton.  But isn't it a bit early to start doubling down on anything?  At least TST is on fire right now.  We're getting great traffic and solid discussion on all kinds of things.  And all this without Steven Jackson.

Unfortunately (or as it may be the opposite), I won't be able to watch this one since I'll be en route from the lovely sands of Iraq toward my quiet home in Georgia.  Another deployment down, another football season ahead.  I can almost smell the hops...  So in case you were revving up your anger engine when I don't reply to your comments, save it.  By the third game, I should have my Rams PleasureDome up in all its HD glory with plenty of beer, bourbon and TST on hand.

Breakdown after the fold.

For game-related info, check out the SBN page for the game.  For Browns news leading up the game, check out Dawgs By Nature.

Act 2 of the Sam Bradford saga.  There are three options here.  One, Sam looks incredible, shreds up the defense, and everyone is riding the wave of Bradford mania from coast to coast.  Two, Sam looks horrible and the world declares him an immediate bust.  Or three, something in between akin to what we saw in game 1.  The smart money's on three, but who knows.

As for the receiving corps, which were getting serious attention at TST this week, it's another chance for separation among the five candidates after Laurent Robinson and Donnie Avery, the likely #1 and #2.  But behind them, it's a battle between Keenan Burton, Brooks Foster, Brandon Gibson, and the slot guys, Danny Amendola and Mardy Gilyard.  Bear in mind, TE is a hell of a unknown right now as well.  Van's mancrush, Daniel Fells, looks like the lead horse, but Mike Hoomanawanui has been useful thus far and Fendi Onobun has many a fan among TSTers.  There's just not many answers to the all the questions.  Really, though, the key is producing with Sam.  As he continues to get his reps and playing time, whoever can show some semblance of a rapport with the heir likely stays in the race.

Cleveland added CB Joe Haden from Florida with the 7th pick in the 2010 NFL Draft, so expect to see him get his reps.  Along with Haden, after starters Eric Wright and Sheldon Brown, Brandon McDonald and Coye Francis will probably get the majority of the early work in before ceding way to yet another incredibly unpopular preseason second half.

No Steven Jackson?  No biggie.  That just means more work for Chris Ogbonnaya, Keith Toston and Kenneth Darby as they were handed second life after Brian Westbrook headed to San Fran.  It may be another game where Rams fans are left without much to say about the position after Steven Jackson unless one of the trio can break out.  Toston had the best night of the three, but that's not saying much.  This one's still up for grabs.

The Browns run a 3-4, and their linebackers are relatively average, although they did add Scott Fujita.  Still, this isn't an amazing run defense, and that's speaking of the first unit.  There's not much reason the Rams shouldn't be able to show more on the ground this weekend than they did against Minnesota.

Yikes.  Is there much I need to preview here?  Probably not.  While Bradford may be the headliner, Rams fans will probably be paying more attention to the line.  Nearly three quarters of TSTers voted this unit as the worst of the team last weekend, and rightly so IMO.  It stings even more knowing that with Jason Brown in the middle, a 2nd overall pick in Jason Smith and top 2nd rounder Rodger Saffold, this should be a reliable unit.  It wasn't last weekend, and that has to change unless we're going to really put Sam to the fire.

Up front, the Browns aren't nearly as destructive as the Vikings in this area, but their 3-man front will likely be staffed by second and third stringers, so if the announced O-line sees some extended time, the expectation has to be that we will see a noticeable improvement here.  I think I speak for anyone who gives a shit about Sam Bradford when I say I sure hope we do.

Another unit in trouble from the Minnesota game, the Rams' secondary needs a rebound performance as well.  You can make the case that the pass rush needs to improve; don't hold your breath.  In any case, there's a lot to improve on in the secondary, and the ridiculous amount of injuries don't help: S James Butler (knee), CB Kevin Dockery (hip), CB Justin King (calf), CB Jerome Murphy (ankle), and TST's favorite son S Kevin Payne (knee) are all hurting going into this one.  Wow.  At least this opens the door for the rest of the secondary, including Marquis Johnson (who was tied for the team high with 8 tackles against the Vikes).

While you might not tremble at the trio of QBs at the top of the Browns' depth chart (Jake Delhomme, Seneca Wallace, and rookie Colt McCoy), I might remind you Sage Rosenfels carved up the Rams for a 300-yard passing day last time out.  With Mohamed Massaquoi getting a lot of attention as a sleeper pick for a breakout season, and Brian Robiskie earning praise inside Cleveland and out, it's not a WR corps you can laugh off.  +1 point for having one of my favorite NFL names on the roster: WR Syndric Steptoe.

Cleveland has loaded up on power backs with Jerome Harrison, rookie Montario Hardesty and CJ Spiller's old Clemson pairing James Davis.  If the expectation out of their running backs is to grind out yards up the middle, then the defensive interior line will have their work cut out for them.  But it will be a good chance for the linebackers to continue to build toward week 1.

The spotlight may shine a bit brighter on Larry Grant this week after profiles from the P-D and the AP this week.  Of course, the flip side of that is Grant's "promotion" meant Bobby Carpenter, the prize of the Alex Barron trade, would be running with the second unit.  He would do well to steal some focus from the fans when he's on the field similar to Penn St. product Josh Hull.  If Hull puts out a repeat performance, it all but assures him the backup spot behind James Laurinaitis.

If there's any area the Rams can improve on this week, it's here.  Led by Joe Thomas at LT, filled in by Eric Steinbach at the left guard spot, and buttressed with the talent of Alex Mack at center, the Browns are a patchwork line of haves and have nots.  The right side of their starting line is already suspect, so the second and third-string groups should be ready made targets for the Rams, especially given what we saw last week.

The Rams got legitimate games out of DE George Selvie, DT Darell Scott, and Jermelle "Mad Dog" Cudjo.  Like Josh Hull, if they can duplicate their efforts this weekend, especially Selvie and Scott, can expect to get more opportunities when it counts.  Still, there's plenty of guys who could use some productivity: Eugene Sims, Hall Davis and Gary Gibson, to name just three.  (Chris Long not mentioned so as to not jinx his play from last week.  Breakout season anyone?)

This week's top 3 storylines brought to you by three things I'm looking forward to most when I get home in a week or so in ascending order:

You're shocked, I'm sure.  But enough preseason - what about college football's opening weekend with LSU-North Carolina, SMU-Texas Tech, Boise St.-Va. Tech and the matchup of the week.......North Texas vs. Clemson?!

I admit it.  I love my booze.  Football has an offseason; deliciousness does not.  I saw an ad on ESPN's Web site yesterday for something about Guiness.  I couldn't even read the words.  Beer, I have missed you.

3.) My wife and my daughter

And allow me a point of sentimentality.  I have, essentially, three families: TST, my brothers in the Army, and my blood family.  As much as I love you guys and my crew here in Iraq, I miss my wife and my daughter.  Literally, I have missed them for these last 10 months.  So when I get home, the order of operations is: Kiss the wife, say hi to the little one, crack open a beer, and turn on some football.  God bless America.  Of course, it hurts a little bit when your football-loving wife has proof that she's been behind the Rams longer than you have: 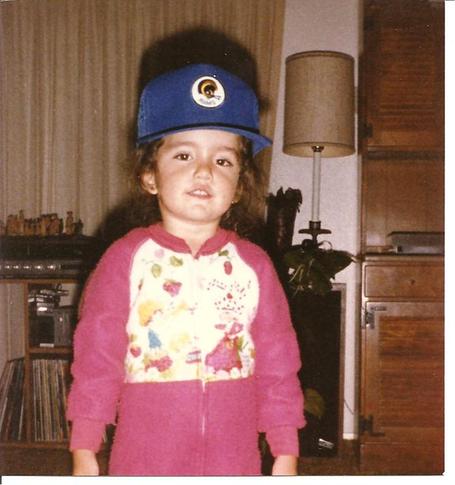 Now that's a wife worth loving.

Go Rams.  Holler at me stateside.