Share All sharing options for: Inside 3k's brain - July 3rd 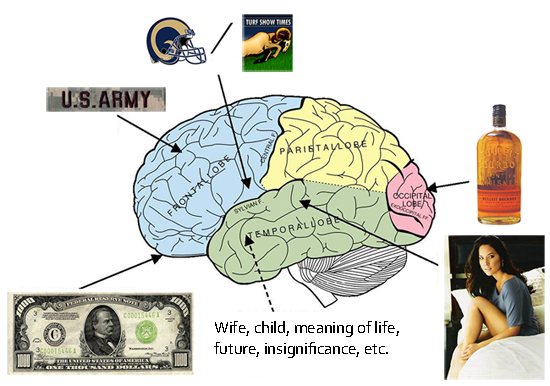 Holy crap.  We gotta hurry and get through this.  LeBron is a free agent, and something could happen at any minute.  Oh wait, my RSS feed just said he's thinking about the Nets and majority owner Russian oligarchionaire Mikhail Gorbachev has promised him his own cabal of crappy spies if he heads to the soon to be Brooklyn Nets.  Oh snaps by the pound, my Twitter feed just got blazed up - apparently he's interested in going to Miami because of hot women.  If there's anything NBA players should base their futures on, its hot women.  That always works out well.  Well shat in a hat, my Facebook just exploded.  Apparently, the Knicks are leading the way thanks to their "media market", as if LeBron isn't going to create his own media market wherever he goes, creating so much media gravity it will become a media black hole, sucking all other stories into the LeBroniverse.  HOTHOLYHAMHOCKS!  My WorldConnect (social media site that won't be available until 2012 and won't even be popular until mid-2013) feed just told me LeBron is going to retire, study traditional Indian medicinal practices, smoke metric tonnes of marihoona, and then come back in about two years.  Stay tuned to SBNation for more, because I don't see how this gets better.

So on to my head cheese.  I've got three pretty random things floating around that, if nothing else, should create some discussion among we Ram faithful:

Let us travel into depths unknown and leave with our sanity intact.  Hopefully.

With 9:11 to go, the Rams had just pulled within a point of the Niners, down 7-6 in the last game of the season.  It looked like a stalwart defensive effort was keeping St. Louis in range of winning just their second game of the season in front of a home crowd eager to see the season behind them.  If anything, they were due such a gift for watching the offense alone - after those final 9 minutes and change had elapsed, the Rams would finish with just 109 total yards, less than half of oft-derided Alex Smith's passing total and just barely more than Frank Gore's 107 game rushing total.  Equally disheartening was seeing that stalwart defensive effort disintegrate.  After Josh Brown's second field goal made it a 1-point game, the 49ers would go on to score three unanswered TDs, embarassing the Rams 28-6 and ending a year to forget, for the most part.  If there was any silver lining, many said, it was that the Rams had secured the first overall pick and could select whichever player they wanted without worrying about another team stealing their future out from under their noses.  But could the Rams have ended up somewhere else in the top tier of the draft and still gotten Bradford, and if so, how much more did a win or two cost us?

I'll leave this one to the financial/contract gurus of the community, but I wonder, since the Lions, Bucs and Chiefs would have passed on Bradford (since they have Matt Stafford, Josh Freeman and Matt Cassel locked up, respectively), how much would we expect to have signed Bradford for at #4?  Sure, the Redskins picked fourth, and had they been in the mix ahead of the Rams, I wouldn't have been surprised to see them take Sam.  And yes, any of those teams could have traded to any combination of the Redskins, Jags, Bills or anyone else who would have been willing to take Sam at less-than-#1 money.  But I just wonder if things had shaken out just a bit differently if we could have had our franchise QB, the man who will stimulate optimism and hope in Ram fans, the One (too much?  Sorry) could have come at nearly half the price.  If there's a franchise that could use it, you'd have to work to argue it's not the Rams, especially to National Football Post's Robert Boland, he of notable credentials, who dropped us from #21 (in 2009) to dead last in his franchise rankings this week (as Van touched on yesterday)

On Monday, news broke that an examination of the late Chris Henry's brain revealed he was suffering from chronic traumatic encephalopathy (translation into non-scientist speak: severe brain damage) despite his youth, just 26 years old when he died.  Sean Morey, a WR on the Seahawks and co-chair of the player union's brain-injury committee, said the news was "sobering. You have to ask yourself how many are playing the game today that have this and don’t even know about it."  The best piece I've read on the subject, which prompted a follow-up, was over at Black Heart Gold Pants, SBN's community for the University of Iowa (which while I have the chance to pitch it, you should check out SBN's college communities when you're not here at TST.  There are some absolutely incredible writers over there).  And while I've read about a dozen lengthy pieces on Henry, previous cases, CTE in general, the NFL's stance on the issue and the possible ramifications, I don't recall reading one that voiced my initial reaction which I used to title this section: no shit.

I'm not a scientist, I'm definitely not Lt .Tuck Pendleton, so I'm left with one question: Why does this story seem to be so surprising to so many people?  I made a comment in a thread on Mark Setterstrom's recent injury that while sarcastic speaks to the common sense that should explain all this: you're talking about some of the biggest, fastest, most explosive guys in the Western Hemisphere colliding in ways that their bodies are often unprepared for with the maximum force they can create with maximal impact.  So again, why are people surprised when players' brains turn out to be severely damaged?  I'm not being insensitive to the humanity that all people deserve, including NFL players, and I'm not disparaging the memory of Chris Henry.  I'm just confused as to why anyone who has ever seen an ass-reducing hit in the NFL is surprised at the findings.  I hope we can get to a point where the physical comforts of players' post-NFL lives aren't diminished by their on-field battles, but I know we're not there yet.  I don't need science to figure that out for me to know it either.  Think of a big hit instant replay when you're watching a football game - many times, the announcers will shut up so you can actually hear the hit.  The reason your body tightens up after watching that hit isn't just because somebody spleen was trisected in slo-mo HD - it's because your eyes just told your brain what they saw and it shat itself.

No, not a Chazz Michael Michaels-style of football in the sewers under the Lou...well, not exactly, but kinda.

So, in my random reading this week, I came across something in Kansas City that opened up all kinds of ideas: SubTropolis.  Let me sum up for the linklazy readers: it's a giant manmade cave used for commercial purposes.  Which led me to a thought: why not build a football field underground?  As the Atlantic investigated, the A/C and heating needs for underground spaces like SubTropolis are 85% less than an overground space.  That's a lot of sweet cheese to be saved for a franchise that plays in a dome, especially in a city where it's especially hot (i.e. Phoenix or Houston).  And the money needed to buy parking space?  Just shove all those parking lots underground and build some kind of transit system to feed everyone to the stadium.  Hell, you can play it up like the train systems in airports and plaster ads on the walls as the RamTram (copyrighted, suckas!) takes you to the Budweiser Underground (that one sucks, so you can have it for free...).  Just something that passed through the synapses this week that I thought was worth passing along.  Is this a future reality or is it like flying cars, something that will never happen? Wait, what?  The FAA has approved a flak-flonking flying car?!?!  I gotta go get me one of them thangs and put some aerodubs on it.