Anatomy of a James Laurinaitis sack

Share All sharing options for: Anatomy of a James Laurinaitis sack

Fans of minutia and all the Xs and Os that go into a playbook are going to love this site: Blitzology. Yes, it's exactly what it sounds like, a blog dedicated to nothing but the blitz. Though I can't confirm it, I do believe that this is not an offseason pet project of St. Louis Rams head coach Steve Spagnuolo.

It does, however, contain a good look at one of his preferred blitzing tactics, using the linebackers and safeties to create misdirection among offensive blockers and blitz when the offensive line moves in slide protection.

I'm not going to repeat the specifics of how the blitz works since the site does a much better job explaining it than I could. Essentially, the defensive line engages with a man, with one end dropping back. Two linebackers walk up toward gaps and one safety rushes up to the line at the snap and the other stays back to deke the offense's backfield blocker who has to take a minute to read the safety and one of the linebackers. One of those linebackers can stay behind the line waiting for the center to commit himself elsewhere and then rush into the box once that happens, with the running back having taken himself far enough out of the play to prevent him from coming back in to block the linebacker.

Below the jump, a diagram and an example featuring James Laurinaitis.

Here's a diagram from the site, which also includes a link of Spagnuolo's Giants defense sacking Tom Brady and writing Spags' ticket to a head coaching job. 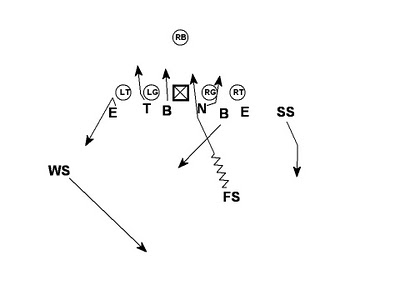 Finally, here's an example of Animal Junior getting a week 12 sack on Seattle QB Matt Hasselbeck on a similar play on the Seahawks' first possession of the game. You'll notice the subtle differences from the diagram above. The RE drops back in coverage and safeties hold their positions. David Vobora takes a fairly aggressive approach which pulls Seattle running back Justin Forsett in and allows Laurinaitis to burst in for the sack.

Good stuff that I hope we'll see much more of in the season ahead.