I hope everyone is having a great saturday afternoon, It's been a long day for me but hopefully it's better for y'all, Well lets get into it.

The first reported Signing was Jerome Murphy then after this the Rams signed more apparently. It turns out he is the highest draft pick to be signed in the NFL so far.

This has to be very encouraging to Rams fans, especially to the fans who hate the front office and were worried because we haven't signed a draft pick.

Info after the jump.

Now what that means is that fans that are saying we don't have enough money to sign Sam Bradford are wrong. Especially since from my understanding all that matters right now is the signing bonus.

I love what the front office is doing so far and I am almost positive that Sam Bradford will have a contract before the beginning of training camp starts if not he will be there the week after which is the only one that matters anyway.

Here is some info on these two draft picks, Also let it be known that these two rookies I think will make an impact, No i am not a psychic but the Rams most be listening to me. 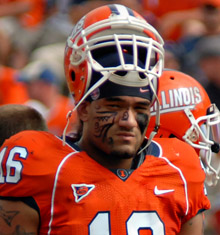 Hoomanawanui Overview: The Rams raised a few of eyebrows when we drafted Micheal Hoomanawanui in the 5th round.

Hoomanawanui Strengths: He is a great blocker, and also shows good hands. He is also a good character guy. He has great size and hard to bring down espically when he has a head of steam. Makes the difficult catch when draped around defenders.

Hoomanawanui Fact: I mean come on we need another Tight End with a funny name it's been to long since the Rams released Brandon Manumaleuna

Tevin's Call: He could end up being a very solid player, There have been very solid reports about him becoming a good receiver option since OTA's started(He made a one hand catch in traffic). Also alot of reports say he could end up being a starter if he can become more of a reciever option during the year look for him to be number 2 by the start of the season and maybe a number one down the line. This is an article I wrote about Jerome Murphy

It was first reported that DE George Selvie and LB Josh Hull were signed to 4yr deals. http://twitter.com/StullySTL/statuses/17101817721