Eleven picks later, the draft is over and the Rams have a new crop of talent to add to the depth chart going into training camp.  It's been a long time coming since the last regular season game ended on Jan. 3.

And now for some grades I'm sure will end up making me look like a dumbass in a couple years, if anyone remembers to search for this after the 2014 draft:

In spite of the trade rumors and the fading hopes of drafting Ndamukong Suh, we all pretty much knew this was going to happen.  Didn't we?  And whether or not you liked the pick or agreed with it or (insert appropriate description of your feelings here), there should be a couple points we can all agree on (after the jump):

- This team and this franchise was going nowhere with Marc Bulger as the top QB.  The teams of the mid-decade in which Bulger flourished gave way to the painful years in '07, '08 and '09 when both Bulger, and the Rams, weren't very good (really, were downright horrible for the most part).  Taking Bradford both allows the team and the fan base to put that era in the past and build on the promise of a new direction.

- There is no position more important in the sport of football than the quarterback.  While any of us could argue that there were opportunities to improve the team to a larger degree in picking someone else, drafting Bradford provides a significant upgrade at, again, the most important position in the sport.  Considering the Suh alternative, it would be hard to argue that Bradford will have less impact in a game for the Rams than Suh will have in a game for the Lions.

- Bradford has the character and mental makeup you look for in a quarterback.  Concerns relating to the system he played in or his injuries are valid.  Any concerns about Bradford as a person aren't at this point.  If Ryan Leaf taught the league anything, it's that being a physically talented knucklehead is different than just being physically talented. Character counts, and Bradford gets an A+ in this category.

- The front office and Spagnuolo hadn't really imprinted themselves on the team psyche until this pick.  Every new front office / coaching staff takes a QB early on in their tenure.  Why?  To give them a QB they can develop to run their offense.  It's not a complicated issue.  Some, like Josh McDaniels and his new QB Tim Tebow or then Oakland Raiders (and later Tennessee Volunteers and now USC Trojans) HC Lane Kiffin with Jamarcus Russell, get a bit, uh, wacky in choosing their new signal caller.  With Bradford leading the offense for the forseeable future, Spags, Devaney and everyone involved in the organization can take comfort in the certainty at the position.

A surprising pick in a draft full of them.  I had him going in the third in my last mock, although in my unfinished mock 5.0, I had him going at #50 to Kansas City, so not horrible value especially for a OT.  Still, in hindsight, there was a lot of talent in other positions that would have made sense here: DT Brian Price, RB Dexter McCluster, WR Arrelious Benn, and TE Rob Gronkowksi just to name a few.

It's hard to argue against giving Bradford more protection, but this now gives us three pure tackles on the roster: Alex Barron, Jason Smith and Rodger Saffold.  If the FO was this down on Barron, why not try to move him for another draft pick?  As frustrating as his penalty penchant is, he isn't a bad tackle.  It just seems like we took a luxury pick here.  That's not a bad thing, but if you're coming off of a 1-15 season, it's hard to justify.

At this point, I realized I had no idea what this front office was going to do with any pick.  Taking a CB was just not on my radar at this point.  I was looking at TE Ed Dickson, DE Alex Carrington, WR Damian Williams, DT Corey Peters or OLB Navorro Bowman.  But of course, when the pick was over, it smelled like BradleyFletcherBradley 2.0.

Another physical press corner with long arms that throws a lot of weight around at the CB position, but was that worth spending a 3rd round pick on with so many offensive talents still available?  I don't have a problem with Murphy as a prospect; in my unfinished mock, I had him going at the end of the 3rd.  I just wonder if this pick was a BPA pick; if so, I worry that in picking BPA, we ignored some areas that needed a 3rd-round level talent much more than CB.

This is a very likeable pick.  His negatives are obvious: lack of size and top-end speed and below-average hands. His plusses are obvious as well: YAC monster with a plethora of jukes, plays with tenacity despite size, hard worker.

BTW, a quick rant: I hate ESPN / Scouts Inc.'s reports sometimes.  They cite character concerns for Gilyard and grade him a 3 (1 being the best 5 being the worst) on "intangibles".  Let's break that down.  After his freshman 2005 season, he had his scholarship pulled for academic performance.  We've seen this happen to hundreds of college players, and 99% of the time, that becomes the last you've heard of them.  Gilyard took a different route  To get the money he needed to re-enroll at Cincy, he took four different jobs and slept in a car.  I say again, the kid worked four jobs and slept in a em-effing Grand Am just to get another chance.  And that was the last of it.  That counts as character issues?  To ESPN / Scouts Inc. it does.  Hell, they gave Carlos Dunlap, who only plays half of the snaps he sees on the field and has a DUI at the end of a college season to his credit,  a 2.  That's right, the DUI low-effort Dunlap has better intangibles than Mardy Gilyard who worked four jobs and slept in a flucking Pontiac Grand Am just to get back in to school.

This one makes no sense to me.  Hooma's got great size...and that's it.  I saw him in about a half dozen games over 2009 and 2008 and wasn't impressed by much besides his size.  How does that help the Rams' offense?  I'm not sure.  And yes, the instinct says to compare him to Brandon Manumaleuna, but has a racist tinge to it, no?  The reality is, this pick was spent on a large, large TE who, if he sees the field in 2010 and produces, will be a surprise.

I only caught two ULL games the last two years, and that's only because they played UNT.  He had a good game last year, but hell, it was UNT.  Still, there's a lot to like about his tangibles obviously.  I just feel like the D-line deserved to be addressed earlier than this pick.

Another strange TE pick, and makes even less sense after already drafting one TE.  Why no Dorin Dickerson?  I just don't understand why we spent two picks on two huge tight ends of whom neither will likely offer much in the passing game.

A project player with the right frame and tangibles at a position that relies heavily on frame and tangibles.   This is what 6th round picks are for.  I do love how after a pick like this, suddenly everyone knows who he is instead of just being honest and admitting you never have and never will watch a West Texas A&M game.

A solid nickel back prospect, but underscouted simply because he never saw the field enough.  Bear in mind, the two CBs ahead of Johnson went in the 1st and 2nd rounds of this year's draft (Kareem Jackson and Javier Arenas, respectively).  So while that suggests he'll be behind the curve on experience, it also means he should have plenty of potential to tap out.  Great value for a 7th rounder.

I do wonder what this says about the secondary.  Three CBs (including two third-rounders) in the last two years.  Is there a stronger demand from the secondary in the Spagnuolo defense than we anticipated?

Who is George Selvie?  Is he the phenom that burst on to the national radar and helped put South Florida on the map?  Or is he the old hat with one too few tricks in the bag that was rarely heard from in the last two years?  In '06 and '07, Selvie racked up 123 tackles and 19 sacks (including a ridiculous 14 sacks in 2007 alone).  These last two years, just 83 and 8.  Sure, the common refrain is that increased blocking focus and double teams limited his productivity (and, thus, allowed fellow S. Florida DE Jason Pierre-Paul to terrorize offensive linemen).  Still, he isn't very big for an end, and he's not incredibly fast.  So, while we might limit the expectations, you don't get many seventh rounders with as much production as he has on his resume.

Another project lineman like David Vobora, though coming from Penn St., he has arguably the best linebacker education college football can provide.  And playing in the same LB corps as Sean Lee (who went in the 2nd round) and Navorro Bowman (who was picked in the 3rd) suggests he is used to playing with NFL-caliber linebackers.

It's hard to get incredibly excited by this draft.  When you get a pair of TEs and a pair of CBs, that's not exactly the recipe for a flashy draft.  Still, with Bradford at the helm, things already look better for the Rams.

A quick note on what I've got coming up in draft-related stuff before we get into full offseason mode:

- a look at what the draft means, not just for the Rams but for front offices across the league 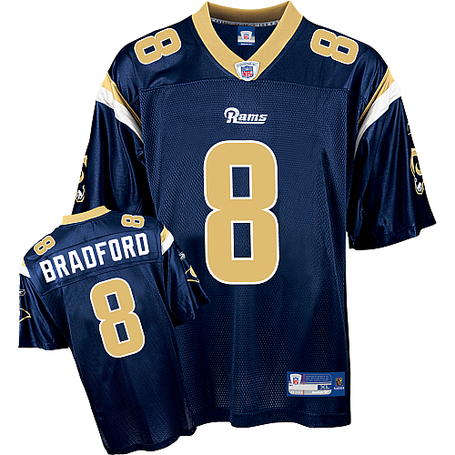