No, Stan Kroenke is not the hot new Swiss-German post-modern author burning up the Sprockets best-seller list. Stan Kroenke owns a 40 percent minority stake in the St. Louis Rams, and he must make a decision today as to whether or not he will keep his stake, sell it or bid for team ownership himself. Which way is Kroenke likely to go?

The last option is all but guaranteed not to happen, given the league's ownership rules. Stan the Man's decision between selling out his shares in the Rams or hanging on most likely will come down to what course he wants to pursue with his ownership in the Arsenal, part of the English Premier League (soccer, for the uninitiated out there).

Kroenke has slowly built up his ownership stake in the UK football team. He owns 29.9 percent of the club and with 10 more shares will be required to make a takeover bid for the Arsenal franchise. The rules of takeover bids for the Arsenal are complex, to say the least, so I'll let you read and interpret them on their own so that I don't have to try and explain it here.

Kroenke isn't the only one with his eyes on the Arsenal. Russian oligarch Alisher Usmanov owns 25 percent of the team want to make a bid for ownership himself. There are whispers that some would prefer Usmanov to remain at his current level, i.e. not the team's owner, and that could drive Kroenke's ownership bid. Kroenke has the support of most of the other Arsenal board members.

So, football fans of both kinds on two continents will find out what the next chapter has in store for their teams sometime today.

[Note by VanRam, 04/12/10 12:32 PM EDT ] No, TST is not becoming a soccer blog, but there's been an interesting development in the Arsenal saga that could impact Kroenke's decision regarding his 40 percent stake in the Rams. Lady Nina Bracewell-Smith has hired Blackstone (a bank/financial management company) to sell her 16 percent stake in the Arsenal. What does that mean for Kroenke and the Rams? Well, it could mean that he'll line up as the most likely buyer - especially with new reports that Usmanov's group is not ready for a takeover bid. It could also mean that he's told the Arsenal folks he doesn't want a shot at a takeover and she's entrusted Blackstone in order to get the highest bidder.

[Note by VanRam, 04/12/10 3:06 PM EDT ] Someone asked me in a water cooler conversation about what I thought Kroenke's intentions were. Not having ESP, I can't say for sure. I suspect the Arsenal are a more prosperous venture than the St. Louis Rams, but there might be a lot more at play for those involved.

[Note by VanRam, 04/12/10 4:57 PM EDT ] The Arsenal ownership situation is fascinating. Here's a little more insight. If Kroenke were to buy Bracewell-Smith's shares, representing 15.9 percent ownership of the club, he could do so at 8,500 British pounds (slightly more than $13,000) per share. That's below market value, or at least below what she thinks she can get from the shares. Kroenke's price per share would value Bracewell-Smith's at $129.3 million.  In short, her move could be an effort  to get out before a Kroenke takeover bid costs her lots of money.

Sources in this report from the Guardian UK believe that Bracewell-Smith will be unable to generate interest at the price she wants.

Kroenke would need almost $569 million to purchase full ownership in the Arsenal. He would receive roughly $300 million for his 40 percent stake in the Rams.

[Note by 3k, 04/12/10 9:02 PM EDT ] This just in - Stan Kroenke is two different people.  There is Arsenal owner Stan Kroenke, pepper-haired, bushy-stached and affable.  Then there is Rams owner Stan Kroenke, who is sly, with a much more discerning mustache and a tan that says "You and I both know I got this tan in St. Tropez."  Believe it.

Arsenal Kroenke (on the left - Usmanov is the fat Russian walrus on the right who is staring into your eyes, deciding whether or not your offspring are tasty): 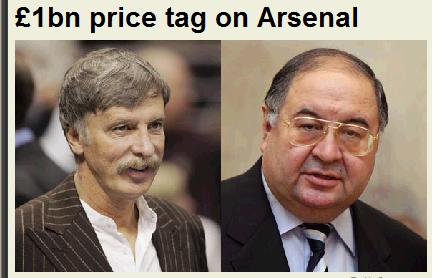 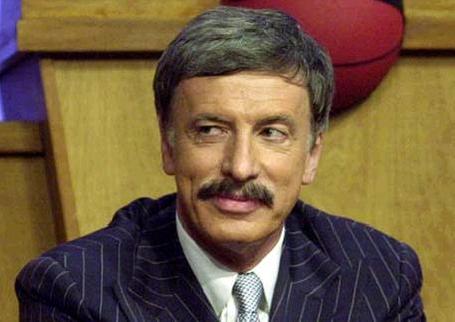