Captain of the Tailgate: Libation liberation

Share All sharing options for: Captain of the Tailgate: Libation liberation

Ah, alcohol. Booze. Sauce. Spirits. Hooch. Firewater. Some ol' John Barleycorn. Whatever you call it, it's ready when you are.

Now alcohol is not for kids. I know we have some younger readers out there, so let's set the bar high for the next generation of men. Don't be the derp. Keep your clothes on. Alcohol isn't something to play around with. It's something to be respected. Hell, it's like anything else worth enjoying responsibly.

You can go to Burger King and get you a pair of double whoppers with cheese or the Stackers or whatever the hell you want. And it will likely taste pretty good. But let's be honest: it's crap, and it's barely food. I'm pretty sure the lettuce used to be a magazine cover at one point in it's life, and the bread is corrugated. On the other side of the spectrum, you can get a burger with Wagyu beef, sprinkled with white truffles, onion tempura fried in champagne batter topped with Spanish Pata Negra ham, stuffed into an Iranian saffron and truffle bun. It's $186. And it's made by Burger King.

My point? It's not about label, or the flash or the marketing or any of that crap. It's about the experience. My family loves Crown Royal. It's a solid whiskey, but nothing special. Crown makes a variety of whiskeys and you can cut them up in all kinds of ways (example: we make a Baton Rouge Daylight Surprise out of Crown, coffee and some hot sauce. It's delicious.). But the real reason we drink it? Because we drink it.

So whether you're out tailgating yourself or just passing by, don't hate on the guy who drives a Tesla and has the newest micromicromicrobrew. And you, Richie McMoneypants, don't hate on Bubba just because he splurged on a giant bottle of liquor that came in a plastic jug with a picture of a hog on on it. It's not the liquor. It's the experience.

I'll give you one of my favorites that I was really enjoying after my first deployment a couple years ago -- Captain Morgan Private Stock: 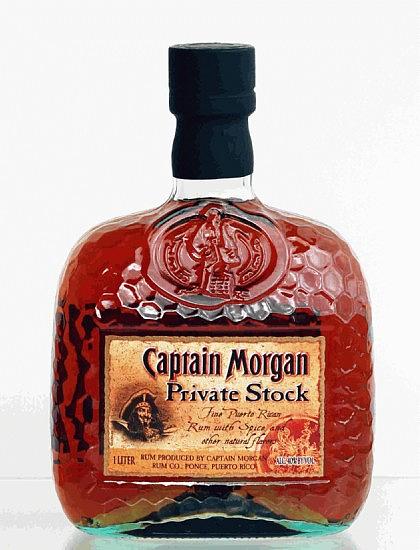 It's got a blatant vanilla punch up front with some toffee and brown sugar notes in the aftertaste. That's tough to beat. I had it with some egg nog back in the day and it was flacking wonderful. So thanks to you, Cap'n. And just in case you're not that into alcohol, here's something we can all agree on: Marisa Miller is hot.

So what's your approach to the world of sweet, sweet sauce? What's your drink of choice? Are you a liquor or a beer guy? Are you still in full college mode where it doesn't matter what it looks like, tastes like or what it's called as long it makes ugly women look hotter? Just don't drink that Fourloko crap. Have some sense. Have some pride. And enjoy the experience.