I wasn't able to knock out another episode of Turf Show Radio with Van last week as I had to return to Dallas to motivate the Rangers to win a game in the World Series. It was kind of like Iris Gaines from the Natural: 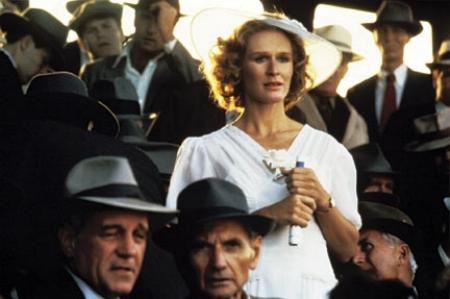 Except, I wasn't wearing a dress. I did wear the hat though... But that's all good and done with now. The drama of the World Series has given way to the Moss Sweepstakes, and so even without Rams football this weekend, there's plenty of fodder for the faithful.

On this Saturday's episode, we'll discuss (among other topics):

- Randy, uh, I forget his last name. Some no-name guy who can't even find an NFL home...

- How good is the Rams defense? (Not rhetorical)

And this week, we're premiering the fantopicoftheweekforTurfShowRadio, more commonly known as the FTOTWFTSR (pronounced fuh-tot-wuh-foot-sir). Just vote in the poll; if you're on other, drop a comment.

As always, call, open thread, facebook, twitter, whatever. Just get in where you fit in. (Note: you fit in on Turf Show Radio.)